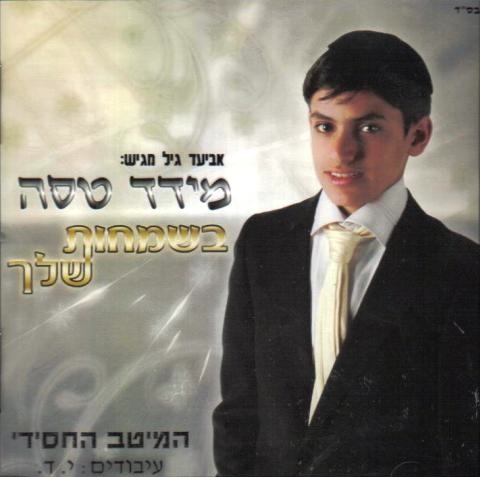 (Special thanks to Yosef G for the music)

For those of you who haven’t heard of Meydad Tasa, where have you been? Tasa, now fifteen years old, has been all over Israel doing concerts. He can also be found on YouTube. He debuted with “Against the Flame” in 2006, followed by “Al Naharos Bavel” in 2008, and “Slichot” in 2008. He has made guest appearances on “Hu Levado” and “Benichoach Shabat – The Best Shabat Songs“. When will Tasa end his childhood career? I’m not sure, but if you’re like me, you want it to last as long as possible!

Now Tasa has released “Basmachot Shelcha” a “Simcha” album, which can be purchased on Israel-Music or GalPaz. This album features some of his own songs as well as other popular songs from around the Jewish music industry. On this album, you can hear how his voice has matured and yet he still manages to hit tremendous keys. However, there is a downside to this album. The transitions between songs are a bit rough and can get on the nerves of any music enthusiast. Also, some of the songs are a bit dated, and I was hoping for something more up to date.

I’m writing this review in the car on the way to a chassunah in Baltimore with Shwekey playing in the background for the rest of the people in the car. Therefore, I’d like to take this moment to give a huge yasher koyach to my headphones, which allow me to listen to this album and deliver a review to you, my readers. (clap clap)

Update: This album can now be bought on Aderet’s website, Mostlymusic.com

Pesicha (#1)
This is an opening to the first section of the album. Starts off slow and then pumps you up for the first song.

Od Yeshoma
There’s a rough transition from Pesicha to Od Yeshoma. Don’t worry; it gets good once you hear Tasa’s voice. However, the adult choir starting at 0:40, seems to be missing it’s depth.

Keitzad
Great sound. Tasa’s voice sounds crisp. However, there’s too much choir and not enough of Tasa on this classic song. The length of the song is a minute and fourty-three seconds and Tasa only sings the first thirty-four seconds of it :( .

Matzliach Moshiach
Nice! An Israeli singing Yiddish! That’s achdus (unity) for you! Avraham Fried is known for his shtick while he sings, but Tasa goes above and beyond with his own shtick and outdoes him here. You’ve just got to love the way Tasa plays with this song. The music in the background is great as well.

Ahallel Amallel (Favorite!!!)
Another rough transition; this time from Matzliach. Tasa takes over for the choir at 0:44 and sings this song as if it’s his own. This Yeedle song sounds as if it was custom built for Tasa’s accent, amazing!

Bizee Hashoh
More Yiddish! The fact that this song sounds great with Tasa’s voice furthers my belief that this child can sound great with any song.

Yatzliach
Once again Tasa sounds great and the music has a fresh sound to it. I feel like dancing now! I’ll be back later to finish this review… :P

Pesicha (#2)
Here’s another introduction for the second section of the album.

Hesech Hadaas
I’m not a fan of this tune from ‘Hu Levado’, but Tasa’s rendition sounds great. There’s something about his voice that forces you listen time and time again. The way he drags out the word Moshiach at 1:22-1:24 is very shticky.

Meirosh Tzurim (Hein Am)
I’ve noticed that Tasa does Shwekey very well, because the songs are more than befitting for his Israeli accent. The second time around on the low part (0:33 – 0:44) is super shticky, a must listen. After hearing the song this way, you’ll be singing it like this from here on out.

Melech
Melech! Like this song hasn’t been overdone. Well, then again, there’s a very good reason. It’s an amazing composition by Mona Rosenblum. To hear it once again with Meydad Tasa’s vocals brings a welcomed addition to the list of “Melech” singers.

Shehechiyanu
Way back from Shwekey’s first album; Shehechiyanu! Tasa brings it back sounding fresh. Perhaps we should recite a shehechiyanu on this song (so corny… I know. I blame my parents. It’s in my genes).

Maaminim
A song straight from the King of Jewish music, Mordechai Ben David! The music on this track is amazing. Have you ever heard maaminim sound this good? It’s quite a switch from the deeper adult of voice of MBD to the younger sfardi accented voice of Tasa. Something interesting to note: What’s up with the random addition to the song at 2:03 to the end of the song? Listen for your self.

Zochreni Nah
I had heard this famous song, composed by Dov Shurin, for the first time on Eli Gerstner’s – Yosis Orchestra album and I saw Gerstner use this song to open concerts many times. There’s a nice musical interlude from 0:53-1:14; it’s quite random, but so am I. Perhaps that’s why I like it! :)

Kisheim Sheani
An Avraham Fried song, composed by Moshe Laufer. Although, I’ve never heard Fried sing it, I’ve heard this song is on Sameach at the Wheel 2, with Pruzansky singing it. I think Pruz did a better job. Shh! Don’t tell anyone. :)

Bo Yavoi
Here’s another song from the “King”, MBD. This song wasn’t originally arranged as a fast song, but, apparently, any song can be played with and turned from slow to fast. See “Al Naharos Bavel” later on this album. My favorite part of this song is from 1:41-1:51. Listen for yourself to hear the shtick Tasa throws in.

Mareh Cohein
This is such a happy-go-lucky song. Not as much as the next song, but this song definitely puts you in a good mood. Wee!!! Lets go play on the slides! :)

Oleinu Lishabeyach
This song is the first track from his first album and a very funky video of it can be seen here (prepare for disco lip-syncing). I’ve never heard anyone else sing this before, and to tell you the truth, I’m not sure if anyone else could pull it off as well as he does. This song has a child’s ring to it and subsequently, is perfect for his voice.

Esa Einai
From his “Al Naharos Bavel” album, this song, I felt was one of the weaker ones on the album. However, because its length has been shortened, it’s actually pretty good! From 1:33 to the end is hardcore sfardi shtick!

Al Naharos Bavel (Faster)
This song starts off with music from the Miami Boys Choir… odd. Anyway, Tasa takes his hit song, “Al Naharos Bavel” and sings only the chorus, pumping it up. This song concludes the second section as well. A well made music video of this song can be seen here.

Lesheim Shamayim
Ouch! There’s another rough transition from the intro. This song is the title track from Shwekey’s latest album. Tasa sounds great. I would love to hear a Shwekey/Tasa duet! And once again, there’s another random shtickel on this song from 1:33 until the end.

Ma Ma Ma
There’s no such thing as overusing one artists song selection right? Especially Shewkey! Well if there is something wrong with it, tough, because here’s another song from Shwekey’s latest album. Also, it’s cute hearing a child sing this song. It sounds like he’s calling out for his mommy (ma ma ma)! He already had a song devoted to his mother on his “Al Naharos Bavel” album, so why not another shout out to his mother! (HEY MOM!) A video of him singing this song can be seen here.

Hazman Katzer
This is one song where I don’t appreciate the change applied to it. They slowed down this hit song to try to give it a hora beat. :( It was fine the way it was! And this is how they end the third section too! Aww nuts…

Anavim (Favorite!!!)
Let me start of by saying, Anavim is very likely the hit song of this generation. There’s so much depth and heart in it. Composed by the one and only, Yossi Green. The best version I had heard was Shwekey and Green singing it together for Shwekey’s concert in Cesaria. Meydad Tasa sings it on this album and in my opinion, blows every other rendition of this song out of the water. Not only are the arrangements amazing, but also his voice sounds so good.
Listen for yourself for all the amazing shtick he pulls off with his voice. For instance, the way he sings the word “Viomer” as he enters the chorus. The choir in the middle of the song is fantastic as well. Everything about this song screams delight. Baruch Hashem for the combination of Green’s fantastic composition and Tasa’s vocals.

V’zakeini (Favorite!!!)
After the success of Anavim, why not take a crack at the second most popular slow song playing everywhere? Baruch Levine’s V’zakeni.
Listen for Tasa’s s’fardi shtick in the beginning of the song. That’s a nice addition! I’ve heard many children sing this song, always with Baruch Levine. Yosef Schick, Simcha Levinstein, Ami Eller, Yoni Stern, etc. If Tasa sang this with Levine, I’m pretty sure he would take over the show. Why? Because the shtick that Tasa throws in are out of this world. The “Ooo” shtick from 2:47-3:00 is gadlus (greatness)! The whole song is a must listen, but from 3:34 and on is the ikur (main part) of the song.

Ochila Lakel
This is the first time I’m hearing this song, so I have nothing to compare it to other than itself. There’s some gorgeous guitar strumming throughout the song. Sounds like it would be a great kumzits song for around the campfire. Tasa really goes all out in this song, adding in shtick at every point possible in the song. Seriously, this song is overflowing with shtick like a cup of wine at havdalah [I know… really bad comparison, go with it! :)] I love the piece at 4:03-4:13. Wow! 4:48 until the end, Tasa is superb; the music gets rocky and he goes all out.

Suprisingly enough, I am pleased with this album in its entirety. Yes, the transitions could be much better and the song selection would be better if it were more updated. Still, for what it does deliver, it delivers well. Should you buy this album? There are two factors. A. Do you like simcha albums? Which most likely means, no new songs. B. Do you enjoy Meydad Tasa’s voice? If you’re a fan of his voice, then this is a must buy. Speaking of which, for those of you who don’t feel like scrolling up, you can buy it here on Israel-Music or GalPaz. Personally, I would spend the money this album. I plan to play this album a lot in camp this summer, this way I’ll be milking it for every penny. I’m sure the kids will get a kick out of some of their favorite songs being sung by Tasa’s talented voice.