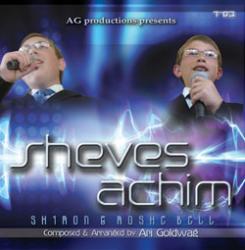 Hey, everyone! In another Jewish Music Report first, JM Derech and Kol Isha have put their heads together to bring you a joint review of Sheves Achim, a CD we both love.

Kol Isha:In general, I’ve resigned myself to the idea that if I’m really lucky, a CD will have more good songs than bad.Mind you, I’m not happy about it, but more often than not, that’s the reality.So many CDs.So few good songs.But every now and then a CD comes out that reminds you what a CD ought to be.Every song solid.Well done.And well sung.

I’m guessing half of you have never heard of Shimon Bell, Moshe Bell or Sheves Achim.Do yourself a favor and just go out now and buy the CD.You won’t regret it.

Sheves Achim was the brainchild of Leeba Bell, mother of Shimon and Moshe Bell.While both Bell brothers sang with Nachman Seltzer’s Shira Chadasha Boys Choir, Mrs. Bell wanted more.She wanted her sons to do an album.

Enter Ari Goldwag, who produced and arranged the entire album.Yes, that’s right, Ari Goldwag.Who knew he could put out a CD of this caliber?The few songs that Goldwag didn’t compose were composed by (are you sitting down?) Shimon and Moshe Bell themselves.This was a first attempt at composing for both Bell brothers, ages 12 and 14.Goldwag told them to go home and write something for the album.And they both came through, big time.

As for Goldwag, he is currently working on his next project, Sheves Chaveirim, featuring a number of boys including Moshe Bell and his own 6 year old son, Moshe Dov.

Gonna turn the rest of this post over to my buddy, JM Derech, to do what he does best:review a CD in his own, inimitable style.I’ve added in a few comments of my own, which for clarity’s sake will appear in italics.

I love this song and played it constantly last summer. During summer camp, I drove the campers back and forth to trips, field, etc., this song playing over and over again. The kids gobbled up every second of it. If you’re looking for an amazing intro, then look no further. The first 40 seconds of this song delivers a rocked out introduction. At 0:41, the older of the two brothers, Shimon Bell, starts off the song. He has a great voice: not as high as his brother’s, but still surpasses most children’s voices. Following a musical interlude, at 2:03, Moshe Bell enters and delivers. Listen for the shticky harmony at 2:19. My favorite part is from 2:58-3:25 (Na Na’s). The key goes up at 3:39, which leads you to another round of electric guitar to end the song.

Kol Isha:This song tells you exactly what to expect from this album.A fresh, exciting song, but not too “out there”.Clearly these boys are very talented and the harmonies are so well done.

For all you music lovers (if you’re reading this, that means you!), listen to the gadlus of the guitar chords. They’re simple, yet gorgeous. The beauty of this song is its simplicity. It’s easy to sing and fun at the same time. Every time I hear this song, I think of hitting a home run, jumping in a pool on a hot summer day, and other related “pleasant” moments that occur in life. Listen for the harmonies from 2:08 and onwards, you’re going to love them. 2:43-3:01 is the cream filling of this song. One more shticky/electric harmony at 3:21 which is worth mentioning as well. My advice to you: this song should be the first song you play on any road trip; it will get that “woohoo!” feeling started :)

KI:This song is one of the few Goldwag composed specifically for this album.Sitting out in his backyard in Eretz Yisroel , guitar in hand, he felt a sense of love for Hashem and K’lal Yisroel wash over him and this song was the result.And it’s a beauty.

This song is perfect for the Shabbos table. The words are from shemoneh esrei by mincha on Shabbos, and the melody delivers everything Shabbos does. Menucha and Simcha. The high harmony at 1:12-1:59 is stunning. The key jumps at 3:58 and pay attention to the double harmony in the background (how high can they go!?).

KI:Hands down, my favorite song on the album.Beautiful, singable.I can’t believe it was composed by a 14 year old.Heard it used at a wedding a few months ago, where it was sung under the chupah.Simply stunning.

A funky and catchy tune. The low part isn’t amazing, but the chorus is superb. Listen for the “Whoaa” at 1:37; very cool. The outstanding harmonies continue at 2:02. Once again, this song is a perfect example of why this album is so good. The harmonies are top quality, and the Bell brother’s voices blend so beautifully.

Another hit slow song. Just relax in your recliner and kick your shoes off. I can see this song being background music for a relaxation tape. “As I count down from ten, you will feel your eyelids getting heavier…” 10…9… Well it’s relaxing until about 5:35, when the key goes up. That wakes you up. So maybe listen to this song around seven minutes before you have to be somewhere. You’ll get five minutes and thirty-four seconds of shut-eye, and then you’ll be good to go afterwards! :)

Disco beat! Quick, everyone form a train! This song is another example of the talents of the Bell brother’s. Moshe Bell not only sings on this song, but he also composed it as well. The song gets really good from 2:39 and on. I really love Shimon Bell’s voice on this song at 3:14. The harmonies behind him are astounding as well. One more noteworthy portion of this song is the “Whoa’s” from 5:17 until the end.

KI:What a great song!My second favorite on the CD.Composed by a 12 year old? How amazing is that?Fun, catchy and great choice of lyrics.

Another funky yet catchy tune. The song starts on a really low key and sounds very cool. Overall, this song is one of my favorites on the album. The falsetto at 2:16 displays their astonishing vocal control. 3:50 and on the harmonies go into full throttle.

This song, composed by Goldwag as a child, also features him singing as a child the first time around. You can hear his son, Moshe Dovid doing harmonies with Ari, low part, third time around. The vocal order goes from deepest to highest. Goldwag (child), Shimon, then Moshe. Remember how I said Mi Ha’ish was relaxing? Well this song tops that one and I guarantee you will fall asleep with this song playing in your ears. The speed of the song picks up when Moshe Bell takes over at 4:05. The song ends with Goldwag as a child. Gorgeous composition!

KI:Sorry, JMD, this song wouldn’t put me to sleep.Way too pretty for that.It’s beautiful, soothing and a great example of how music can put you in a good mood.Love all the voices on this song!

Love the chords on this song. It’s fast and incredibly catchy. The harmonies the second time around are fantastic and electrifying. Amazing electric guitar solo at 2:24. The harmony at 2:35-2:47 is one of the best on the album. The key goes up afterwards and the song ends with same funky chords as it started with.

The first five seconds of the song start out with the real Superman theme song. This song, an English song, starts off with the story of a child who, when he was younger, would dream about being Superman. The second part of the song, takes the story to a later date, when the child becomes an adult. His habits changed from playing to learning and slowly but surely, through his learning, he one day became a Superman to his wife and children. Not the one with a cape, but with a tallis!

Both this song and the Bell brothers made their debut on Shabbos Get Ready, but with a more techno arrangement. This arrangement is more on the rocky side and a great listen for a car ride. Roll down the windows! Pump up the volume! This song is sure to bring a smile to your face, so turn that frown upside down and enjoy this last song on a superior quality album! :)