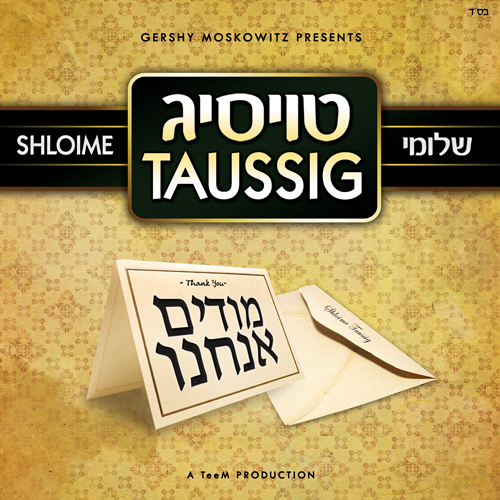 Hey everyone! So glad to be a part of the Jewish Music Report team!

I’ve decided to attempt to spice up my reviews a bit, by adding a “Shtick” section to after each track. This section will allow you to view my opinion on what I feel is the best part of each song.

When I first heard of Shloime Taussig, I thought “another chassidishe singer”. But boy was I wrong! See my final thoughts for more details. What I will say right now, is prepare to be blown away :)

I want everyone to take notice of the spectacular cover art on this album. The album is entitled “Modim Anachnu”, which means, “We thank you”. Therefore, the thank you card concept on and throughout this booklet is brilliant. This design is just another example of the flawless brilliance of Sruly Meyer’s artistic mind.

Al Tira – Composed by Meshulam Greenberger – Arranged by Naftali Yosef Mendlowitz
Okay! An introduction song. Time to get this album off its feet! Listen for the guitar picking throughout the song, it’s sweet! The low part “Al Tira… Al Tira” sounds very slick. The greatest part of this song is that it’s singable, and a singable melody is the essence of music; so points for that! The piece at 2:52 until the end is good, however It would have been nice to have heard more harmony instead of amplifying his voice.
Shtick – (2:52-3:21) Even without harmony, still a great finisher.

Modim Anachnu – Composed and Backup Vocals by Yossi Green – Arranged by Shua Fried
This song starts out with some saxophone action. Every time I hear an intro like this, I think jazz bar (not that I’ve been, of course :D). Yossi Green and his signature multiple voices lends his vocals to this gorgeous song composed by Green himself (Whoa, Sheba Whoa). Like the last one, this song delivers. Every note sounds gorgeous!
Shtick – (4:24-5:09) Listen to Taussig at 4:42, simply gorgeous.

Yehi Yehi – Composed by Lipa Schmeltzer – Arranged by Ruvi Banet
Taussig turns to Lipa for help on this third track. You can tell it’s a Lipa song by the opening of the song, when Taussig is talking in Yiddish. Honestly, I find this song a little boring. But hey! I found Lipa’s hentelach boring and take a look at how popular that song became. This song doesn’t it do it for me, but on a positive note, Taussig sounds solid in this song.
Shtick – (5:09-End) I happen to find the music at the ending of this song very cool.

Hareini Mezaman – Composed by David Kaufman – Arranged by Naftali Yosef Mendlowitz
The thing about this song that makes it good, is its sweetness. I can picture this song be sung at chassunah’s; you know, while nibbling on some food and waiting for the chosson and kallah to make their appearance. I love the “di di da dum” parts in this song. They’re definitely what makes the song.
Shtick – (4:00-End) “Di di da da dum da da dum, oy yoy oy yum!”

Hashem Elokai – Composed by Pinky Weber – Arranged by Naftali Yosef Mendlowitz
The low part of this song has an ominous ring to it. However, the song changes over at the entrance to the chorus and the song take on a sweet and pleasant tone. This song is one that requires harmonies. The choir’s harmonies are fantastic and without them this song would have been mediocre.
Shtick – (5:01-End) Listen for the choir harmonies. :)

Ki Hamalchus – Composed by Shragi Gestetner – Arranged by Naftali Yosef Mendlowitz
After the slow pace of the last song, this rocky song is a welcomed addition. Points to Gestetner and Mendlowitz for this song’s catchy, singable, tune. Chassanim listen up! Add this song to your chassunah’s playlist!
Shtick – (2:30-2:44) Fullness and quality during this part of the song

Harachaman – Composed by Yoeli Polatseck – Arranged by Naftali Yosef Mendlowitz
Does anyone else think of this song as a typical Yeedle song? I’m not impressed with the low part, but the chorus is fantastic. One notable mention here is the beat to this song; very pleasing :).
Shtick – (4:29-End) There wasn’t anything special I could really pick out of this song, besides this nice piece at the end.

Mi Shemamin – Composed by Motti Illowitz – Arranged by Shua Fried
The introduction feels like there should be a man sitting, playing his flute, while a snake is coming out of a vase. This song has a Hora beat. Baruch Hashem, for this song. Ladies and gentleman, I found my favorite song on the album. From the fantastic musical arrangements to the catchy tune to the shticky electric vocal pieces, this song is crammed with yummy musical goodness!!!! :) Want to know how highly I think of this song? Im yirtzeh Hashem, I’m getting married in August and I’m putting this on my hora list for the chassunah!
Shtick – THE ENTIRE SONG IS GADLUS (greatness)!

Ki Atah – Composed by Yoel Hersh Fuchs – Arranged by Naftali Yosef Mendlowitz
This could very well be a good slow song, but after hearing the last song, it doesn’t measure up. It’s definitely not a song I want to hit the “next track” button on, but at the same time, it’s not giving me a geshmake feeling.
Shtick – (3:13-3:37) You can hear Taussig’s fantastic range during this piece.

Keili Ata – Composed by Avrumi Berko – Arranged by Naftali Yosef Mendlowitz
Freilach! Once again, fantastic choir and musical arrangements. Pay attention to all the difficult pieces of music being played throughout this song. For instance, the trumpet from 2:12-2:18.
Shtick – (2:48-3:11) This part of the song is so catchy.

V’haer – Composed by Dudi Kalish – Arranged by Naftali Yosef Mendlowitz Children’s choir arranged by Mo Kiss
This song is quite relaxing. Every album needs a song like this to balance it out. Finally, some children’s voices! You have to love the sweetness of a child’s voice. This song is hands down the best slow song on the album. Why? The simplicity of the arrangements, and the amazing addition of a children’s choir with out-of-this-world harmonies.
Shtick – Every time the choir sings “Ba ba bee da dum”

Shabbos – Composed by Dudi Kalish – Arranged by Naftali Yosef Mendlowitz
The final song on the album. People tend to think, it’s the last song, no one ever gets that far, so it doesn’t need to be that good. On the contrary!

This song is the last song you’ll be hearing. It needs to leave a good taste, and make you want to restart the album from the beginning again for another listen. Baruch Hashem, this song does just that! It’s a beautiful slow song with the words (Shabbos) dedicated to the one day of the week that leaves you with a “good taste” and makes you want to go through a whole another round or week, just to hear or see shabbos again!
Shtick – (4:34-End) The arrangements and vocals from this point on are A+

Final Verdict: I’m usually not a fan of the chassidic accent, but Shloime Taussig has completely changed my viewpoint with a 180 degree turn. Taussig not only has a spectacular voice, but the majority of the songs on this debut album are spectacular and will keep you coming back for more, time and time again. Encore! You can buy the album here on MostlyMusic.com

Visit me on my blog at the Jewish Music Derech