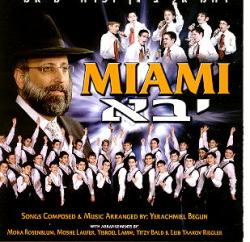 Hello again fellow readers. It’s an honor and a privilege to be given the chance to guest post here on the Jewish Music Report. You can check out my blog, Jewish Music Derech for more fun posts and reviews from yours truly!

Let me start out this review by saying how impressed I am with this album. I had all but lost faith in the Miami Boys Choir after 1999’s Stand Up album. So when Yovo was recently released, I was like “here we go again…” To tell you the truth, I’m not a fan of the preview Aderet threw on their website. They’re C quality clips. How are you supposed to sell an album like that? I guess they figured its Miami, who’s not going to buy it? Well guess what? They were right; I bought it anyway. Anyway, enough yapping! This album is a quality production. On this album, Begun transported the listener into a “time capsule”. The songs are a mix of classic Miami with some contemporary pieces as well. The combination delivers a “blast from the past” mixed with “Bam! In your face!”

The Soloists: Bless you, Yerachmiel Begun for picking solid soloists this time around. There are no voices that make me want to shut off the album and that’s huge for me. The “Miami Ensemble” on Ba’avur is brilliant; kind of gives you that Shalsheles Jr. effect (whoops! did I just mention a competitor?). Of course, you can’t forget the brilliant “Group Harmony Team”, which is something I haven’t seen Miami do, but have seen on the Shira Chadasha Boys Choir (I’m gonna get in trouble for this!). It adds a “shticky” touch to the songs, giving them the fullness they needed.

Arranged by the brilliant Mona Rosenblum. This song gives you that “blast from the past” feeling that I was talking about. The arrangements are flawless, the lyrics flow to the tune, and it’s an all around amazing intro song. The song is classic Miami. In other words, the choir sings the song once through before the soloists come in. At 2:14-2:22 listen for the amazing group harmonies this album is filled with. At 3:12 there is a great musical interlude, followed by a cool Oy Gevalt shtick starting at 3:37. Begun comes in at 4:32 and for the first time in Miami history, I don’t mind it a bit. I always thought he took away from the songs, but this is a short and simple piece that enhances the song. This song is Mammash A’ Gevalt! =)

Every Miami album needs an English song. I haven’t liked any of them since 1995’s One by One. Well, there’s been a change in events. This song is a solid English song; I like it! Begun has always done an amazing job with the lyrics, but the melodies haven’t been so hot. This time though, the lyrics and the melody flow beautifully together. Yisroel Lamm arranged this song, and did an amazing job. Each part of the song has the perfect voice to accompany it. Begun’s harmonies at 5:00 until the end are (speechless). Ya, they’re that good.

This is by far my favorite pick for this album. Arranged by Begun, the music sounds like something off of a Super Mario game (Ahh! Secular influence! CHEIRIM!!). This song is great to exercise too or really to do anything too. Okay, at 2:18, if you don’t listen to this, you basically missed the “sweet candy center” of the song! The soloists voice is amazing and the Group Harmonies are back in full blast. The duet at 3:13 is super sweet. Which is followed by a “Baruch Hagever” (Lev Tahor) harmony at 3:26. At 4:10 the group harmonies come back in blowing you away. You walk away from this song wanting more. This is what every title track should be like. Yasher Koach, Yerachmiel Begun.

Arranged by Moshe Laufer. I’m surprised Begun picked these lyrics, because the last M’heiroh from the Klal Yisrael Together album is classified as a hit (at least, so says Aderet) and its like playing with fireworks trying to outdo a hit. Regardless, this song has gorgeous piano on it. The song is nothing to jump out of your seat over, but it’s still good, especially with Begun’s new group harmony team (I’m telling you, these kids are great). At 5:05 the soloist does a very nice job. But the real star here is the soloist at 5:35. Listen for yourself =)

Yitzi Bald (hey! Where’s his choir?) and Begun arranged this song together. The intro to this song gives you that ominous “We must accomplish the mission!” feeling (Ya, I know, I’m a little crazy). This song is rocked up, but not overly rocked up. At 2:07 the “Ahh” shtick is very cute. This song really gets good at 3:22. The soloist reminds me of Miami alumni, Yosef Schick (amazing voice). The music become relaxed at 4:26 and this is the most gorgeous part of the song. Begun comes in at 4:50 and once again he really adds to the song. You know what it is? He’s no longer dominating the songs. His voice now has that gruff feel to it and has become an impressive enhancer. You know what? I retract my previous statement on favorite pick. This song is easily equal to Yavoh if not better.

Moshe Laufer returns two tracks later with these arrangements on Galei. Another ominous intro; it’s so incredibly random… It makes me feel like I’m soaring, kind of like Kol Noar’s Baruch Hashem (that was a cool intro) without the techno beat of course. I can’t put my finger on what classic Miami song this sounds like, but the music sounds like a repeat. Regardless, it’s good music. Wait a second! This is Ki Heim Chayenu (B’derech Hatorah) music (my mother agrees, so take that!). Anyway, now that we got passed the intro, I have to say the coolest part about this song is the chorus when they say “Hey! Galei, Galei, Galei”. There’s nothing that jumps out at me about this song, but it’s a good listen and definitely not a waste of a track.

Zzzz… No, I’m not falling asleep because it’s a boring song, it’s just the music is so serene. I could totally see myself sitting in a recliner, sipping tea, and relaxing to this song. Begun arranged and Yisroel Lamm orchestrated the music and they did a great job making this song, not in your face. There’s no screaming voices or loud trumpets, its just gorgeous! The harmony at 2:57 is very sweet. This song is so relaxing; I think I’m going to go take a nap now…Zzzz.

Whoa! So much for napping; this is a 180-degree turn from the last song. Begun and Yitzi Bald arranged this song, and put in a nice electric guitar intro like M’leim (YBC) or Vihoer (Shira Chadasha), very cool! (By the way, yes I do get a kick out of mentioning the competition; it keeps me honest!). The Miami Ensemble sings this song. The best part of this song is the “Ooo, Ahh” shtick. The song gets really good at 2:44 and on. If you skip to the ending, starting at 5:00, the words switch to Eitz Chaim and it’s very shticky, a great way to end a song.

This song, arranged by Moshe Laufer, starts off with a gorgeous round of piano playing and strings. It sounds like a song that would have fit nicely on their “Around the Campfire” album. I’m not a huge fan of this song but there are definitely those out there who will enjoy this song. I do feel this song is a bit too long (8:13). But, hey! It’s for sure not a bad quality song! I return to my previous conclusion; this song would sound really cool without the music, as an acapella song. It would have kept it short, and given the Group Harmony Team a chance to show off their acapella harmonies! (Hint, hint).

A classic freilach arranged by Mona Rosenblum! I can see this being sung at Simchas Beis Hashoeiva’s in the future; a lot of crazy men dancing, a little drinking (only a little!), the “to cool to dance” guys on the side playing with their cell phones. What a picturesque thought… Anyway, the soloist at 3:42 is amazing, especially with the harmonies behind him. The “oy oy oy” harmony is very cute. Don’t miss the song from 4:07 until the end. It’s a lot of fun. And from 4:35 and on is hilarious!!!

This song is sung entirely by Yair Kenig. It’s been a while since he gave an entire song to a child. My favorite? 1984’s B’syiata D’shmaya sung by Jonathan Paley. The key element of this song is the amazing instrumental pieces (Leib Yaakov Rigler, you’re the man!). As for the soloist, Kenig has a gorgeous, powerful voice. The way he whines with some words only enhances the tremendous impact of the song. Usually you don’t want to hear your kids whine, but when they’re good at it, let em’ whine away! Starting at 3:42 the song shines in all its glory with the added harmonies. This song is a great way to end an album. It takes you out with a spiritually uplifted feeling.

So what’s the Maskanah (verdict)?

This album is a must buy, not for only Miami Boys Choir lovers, but for everyone! That’s right, you! You, the person reading this really long review! Go out and buy it now! Here, I’ll even help. Help yourself to a link and go!