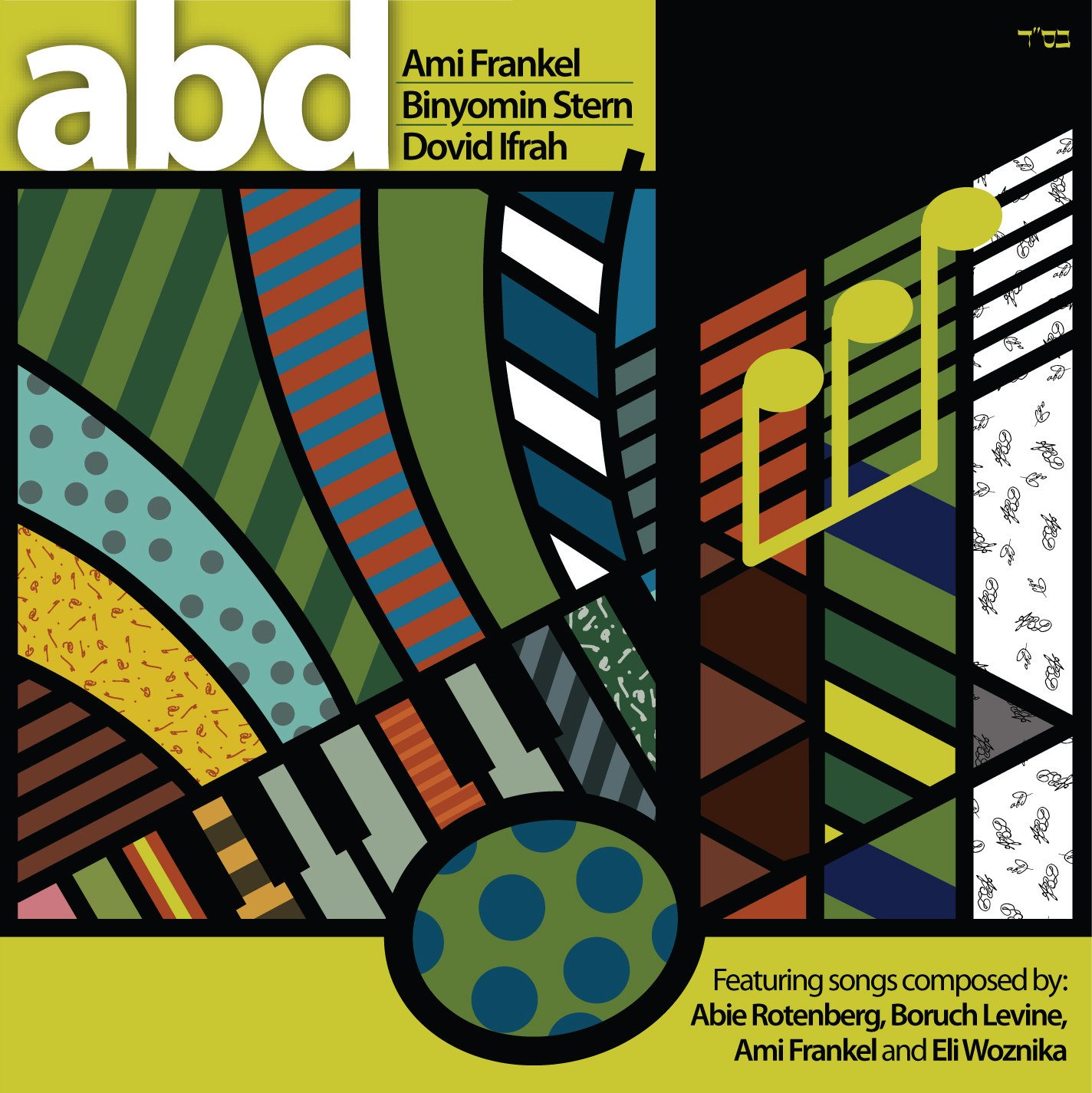 ABD Debut Album – a CD review by Mendel “the Sheichet”

Not much was known about this group before they came out, but I from what I had heard I was expecting a half-baked Dveykus imitation. Obviously I had heard wrong. While there are most certainly large doses of Dveykus influence in this group’s style, as well as some shared elements, it becomes apparent fairly quickly that they have a fresh, striking sound that is all their own. ABD, whose name is an acronym for the first names of its three members – Ami Frankel, Binyomin Stern and Dovid Ifrah, has a style that is injected with spikes of varied flavors, both Jewish and secular. They show themselves adept at anything from folk and classic rock to Latin,  a cappella and everything in between.  However, at the end of the day, the only people they distinctly sound like is ABD.

I was very impressed by the currentness they were able to display in their album without having to resort to extremism. Every inch of this CD is filled with sounds that can not be mistaken as anything but Jewish – no rebellious rock themes, no house club dance beats, no electronically distorted pop vocals – just good ‘ol heartwarming Jewish music. Yet from the arrangements and engineering down to the harmonies and even the very melodies themselves, there is a very fresh and current feel throughout. Chord progressions, instrument tones, harmonies that don’t constantly sit on 3rds and 5ths and many other components all come together just right to form an album that is refreshingly intelligent and mature, yet bright and playful.

The strong point of this group is definitely the individual as well as collective vocal prowess of its members. On the one hand, each of them has the vocal dexterity and sweetness of timbre to be fully able to carry the melody by himself. On the other hand, when their voices unite in harmony, they have the musical sensitivity to leave room for each other. The result is a heartwarming, well balanced, harmonious chorus that is even greater than the sum of its individual parts. Throughout the album they wisely switch frequently bwetween combinations of solo, duo and trio vocals as well as adult and kids backing choirs, which gives the album enough variety to be interesting albeit without losing their overall unique sound. The fact that their backing vocals are in-house, instead of using one of the four or five that everyone else in Jewish music is using contributes greatly to their ability to stand out as well. This is one of the shared elements with Dveykus which I feel benefits the group by preventing them from sounding like anyone else at any point on the album. It also allows them to play with various styles without losing their trademark sound.

On this album I find the songs are particularly well written. Many of the songs are written in whole or in part by ABD member Ami Frankel, which is something I always like to see. It results in a sound that is unique to the group, much in the way the songwriting of Abie Rotenberg was so instrumental in forming the unmistakable sound of the groups he has been involved with. It also shows a level of musical savvy that is becoming clear trend in Jewish music and that will certainly be helpful to this group’s long term prospects. If it holds true that shtick can sell a first album, but its content and quality will sell the next one, I think it is fair to say that ABD’s next album will go flying off the shelves.

The arrangements are very tasteful. While they are not exactly a masterpiece unto themselves, I think they serve the album much better playing the secondary role that they do. Throughout the album I find that painstaking care was taken to leave plenty of room for the voices and with the sensitive vocal harmonies on this CD I have to say that I am enjoying that minimalist approach thoroughly. Other things that stand out from an arrangement standpoint are the warm organic tones of the instruments as well as the sparsity they are used with.

The recording, mix and master engineering was done very much to my taste on this album. I would venture to say that much of the engineering was done by regular studio engineers who don’t know much about Jewish music. If this is in fact so, I would recommend that more of the Jewish producers start using this approach. It’s a very simple equation: when you make use of some outside perspective, you allow new dimension in to the project and you get a fresher, more current sound.

ABD made a wise choice in my opinion by kicking off with an Ami Frankel composition. This immediately gives the listener a full feel for the unique sound of the group. The style is not overdone in any direction, which allows for a comprehension of the general abilities of the group. I right away noticed in this song that they used the brass a bit differently than most albums. As opposed to the standard album opening that hits you with a wall of brass, they keep the opening to just a couple of pieces and for most of the song the brass is used more as part of the rhythm section and for light fills than as a leading instrument with full lines. In addition I enjoyed that they used some deeper brass on a lot of it, a baritone sax or something like that, instead of just the usual blaring tenor instruments throughout.

Written and arranged by Eli Woznica, this might just be my favortie song on the album. It starts out a cappella, in which these guys do a brilliant job. They make excellent use of child soloist Yoni Stern (ABD member Dovid Stern’s son) whose amazingly sweet voice contrasts perfectly with those of the members to really fill out the full sound spectrum without any use of instruments. The sensitive intertwining of voices brings out this mind-blowing melody perfectly. The end of the song breaks into kind of a Gospel anthem, which is the kind of thing I have long been waiting for in Jewish music. The triumphant melody perfectly expresses the meaning of the words we end Daavening with every day, proclaiming the ultmiate triumph of Hashems unity over all of the universe.

Composed by Ami Frankel, I am pleasantly surprised by the almost Yossi Green like depth and complexity of the melody. Not what you’d expect from someone involved in the music industry for only a short while. However, the use of a classic Jewish sounding choir – while not terribly overdone – combined with the very standard Jewish arrangement had the effect to some degree of giving a cliche sound to this track. For this reason I did not like this song as much as I could have if they used more of the signature style they display in most of the other tracks. In the end this song is not a complete waste of disc space but also not particularly memorable.

Composed and arranged baruch levine, this melow song shows a strong stylistic chemistry between songwriter and artist. ABD’s style really seems to fit excellently with Baruch’s sensitive style of songwriting. While any artist can sing predtermined notes, I think it was in the subtle vocal nuances – between the notational lines, so to speak – that ABD really brought out the very best in Boruch’s composing form. The strong ability to translate dry notes into uninhibited emotion in this song makes for a track that you can close your eyes to and really feel what you say before entrusting your soul to your maker for safekeeping every night.

This is a fun song, with a bit of an oriental theme going on. I like the use of words that we say in Daavening every day, yet are not oft used in Jewish music. While I liked the oriental lines that were worked in to the arrangement, I could have done without the attempt at Sephardic vocals. It’s ok when Fried or Lipa do it in songs that are more of the comedic broadway musical variety, but it just doesn’t work for a song that is otherwise non-comedic. What I would have appreciated for this part would be if they brought in a guest vocalist who could do authentic Sephardic vocals. It is something that is done in the secular world with great results (i.e. Sting using Cheb Mami for “Dessert Rose”) that I would like to see used more in Jewish music. Other than that it is a nice song.

This Abie Rotenberg song is one of the nicest on the album. I appreciated the warm classic tube amped guitar used for the intro. This song start out really mellow but then breaks into a nice strong rock ballad, along with the great gospel choral feel adding serious strength. I was pleasantly surprized that ABD was able to fight the temptation to sound like Dveykus and instead deliver in their own unique way.

This English song is more the type of song you would expect to find on an Uncle Moishy album. I initially had trouble understanding why it was put on this album at all, with its juvenille sort of lyrics and melody both. While contemplating this in my car one afternoon at carpool, I received the answer from my kids whose heads, I happened to notice through my rear view mirror, were bobbing excitedly up and down to this song. Knowing from the CD cover that Ami, the writer and composer, has kids of various ages – the piece now fit into the puzzle quite well. Indeed, as a parent, I was touched that they had thought to put a song in especially for their kids…and ours, of course.

This song would have better done with a stronger arrangment. The melody is simply not strong enough to carry itself as some of the others are. This to me is the weakest link of the album, even though the vocals were done well enough. While it has a nice classical string break featured, it comes too late to save the song and the final result overall is mediocre and lacks purpose. This would be where the “Sheichet’s bad song lifeline” would be used for this album. Still one filler song is well ahead of the game for the current Jewish music scene, so I won’t spend much time worrying about it.

Composed by Ami Frankel and Eli Woznica, this song is on the fun and witty side. It has a nice sound, a moderately catchy melody and is far from filler material, even if not especially memorable compared to the level of many of the other songs on the album. In my opinion, while the execution is nicely carried out, it doesn’t necessarily show off their personal style and ability as much as some the others.

Carrying the mark of the true hit, I keep feeling like I have heard this song before…and of course I have – the last time I heard this album. The great melody, accessibility to the average voice and natural chord progression all contribute to a song that you find yourself huming during work and then trying to figure out where it’s from. Well done and a fitting conclusion to a fresh and unique album.