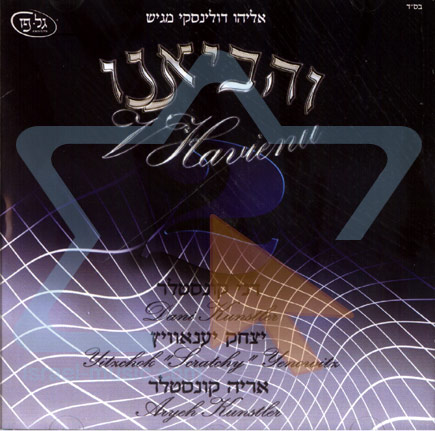 While everyone out there is busy writing their reviews of the Kol Noar Boys Choir’s debut album, I decided to pull a fast one and put out a review on my favorite album of all time, V’havienu 2!

V’havienu is a group that consists of three men, Dani Kunstler, Yitzchok “Scratchy” Yenowitz, and Aryeh Kunstler. Their first album, V’havienu, debuted in 2004. This album was packed full of hartzig (heartfelt), and eidel (sweet) songs. The one complaint I had heard on that album was the fact that the quality of the audio on the songs was not top notch. Even so, it was still an amazing album.

A majority of the people who I have spoken to have never heard of this group V’havienu. If they have heard of them, they’ve only heard of the first album. The second album, released Chanukah of 2006, which I believe is their best, appeared to have gone under the radar. In fact, if you look at Sameach Music’s website, the album is constantly out of stock (I don’t think anyone is buying it). The only place I can find this album online is at jewishstore.com (thanks Google!).

The main reason people have never heard of V’havienu, is because, as Aryeh Kunstler informed me, “we don’t do concerts”. Subsequently, not many people have heard of them. Well I have great news! I’m here to inform you! This is hands down the best combination of voices you will find in the Jewish music industry. Not only do their voices captivate you, but also the actual songs uplift you! The lyrics always fit the tunes perfectly; their albums are truly works of art!

Here’s a preview of the album I put together with permission (thanks Aryeh!).

Zman Chazara (review time!)
V’havienu
One thing you need to know about this group is the fact that the first song always has V’havienu as the lyrics. What’s the difference between this one and the one from the original album? First off, you can tell the recording is waaaaaaay better than before. Second off, you can see they switched styles. This song is more rocked up than any of their previous songs. At 1:10, you can hear what I’m talking about. The harmony is gorgeous and definitely befitting the “rocked up” style they were looking for. The second time around, the harmonies only get better (which is what I love about this group the most). They are always on top of their harmonies; always in the right place, always perfect. At 3:53 in the song, it’s as the song refreshes itself; the music slows down, and “Scratchy” redoes the intro; a couple more rounds of the chorus with fantastic group harmonies follow this, and then the song fades away… Perfect intro song.

Ozreinu
Gorgeous strings in the beginning. You can tell once the lyrics begin, that this song will be deep and inspirational. The harmony at 1:33 adds so much to this song. The chorus begins, and at 2:05, the harmonies fill the song perfectly once again. They sing together after the music interlude, followed by, a harmony at 3:31 that takes your breath away. At 4:26 the song begins its climactic ending (don’t miss a beat!)… Just listen for yourself. =D

Kiracheim
This song was originally sung on Miami Experience 1, by father and son, Avi & Dani Kunstler. It was amazing then, and now they redid the whole song, turning it into a masterpiece. The greatest part? They brought back Avi Kunstler and this time they included Dani Kunstler’s son, Moshe Kunstler. This spectacular song will blow anyone who remembers the original version away. Even those who are hearing this song for the first time will instantly fall in love with it. A hartzig acapella in the beginning gets this song started off with a bang. This song is relaying the message of Hashem’s oneness. The whole song will relax and uplift you at the same time! I usually feel that electric guitar takes away from a hartzig song, but the electric guitar solo at 4:55 only adds to the amazing intensity of this song.

Sameach
This song was composed for “Scratchy’s” chassunah. That’s why you won’t find him on the third V’havienu, because, he got married and moved to the far away West Coast. This is by far my favorite fast song on the album. It’s perfect for listening to while on the road, on the treadmill, or really while doing anything! At 1:26, the amazing harmonies never fail. 2:10, the choir harmonies are back and rocking as usual, and starting at 3:26, a nice display of instrumental music comes in. The song resumes at 3:55 with the chassan at the time, “Scratchy”, taking it out. This song is flat out amazing.

Habet
Just when you think they couldn’t put another amazing slow song on an album after Ozreinu and Kiracheim, they come out with Habet. Habet, composed by Aryeh Kunstler (his Jewish music debut!), had him playing lead guitars in it. This song can be defined in one word: stunning! At 3:00, or if you listen to the preview of the album, you will hear the gorgeous duet (yes both voices are the same guy). At 3:15, Aryeh Kunstler takes over and really adds a lot with his voice to the depth of this song. At 4:07 the electric guitar comes in and only adds to the moving intensity of this song, and at 4:40 until the end is a must listen climactic finish.

Baruch Hu
This song starts out really funky, I wasn’t sure I wanted to listen to it for the first 15 seconds of the song, but don’t worry, my opinion definitely took a 180 degree turn once the song started. Whenever I hear this song, it reminds me of summer, camp season, a cold glass of iced tea, and for some reason beach balls…=D I don’t need to point out the sections in this song, just listen to the whole song, it’s filled with gadlus! Actually, turn to 3:30 and hear the amazing double harmony and then some. Just relax, kick off your shoes and enjoy this song!

Eishes Chayil
The thing I love about this song is the fact you can fall asleep to it. No, not because it’s boring, just because it’s that soothing. The song is mostly sung by “Scratchy”, the softest voice of the three, and he handles this song quite gracefully. At 5:06 the song becomes full, the choir chimes in, and from here until the end is truly a delight.

Esa Einai
This song was written by Mo Sherizon, an alumnus of Yeshivas Ner Yaakov, and is considered an anthem like song for Ner Yaakov. It features a number of Ner Yaakov guys in the choir (how’s that for realism!). There’s a lot of heart in this song. It has Aryeh Kunstler’s style to it and it sounds like it’s straight off of one of his albums. It’s a nice change of pace from the rest of songs, mixing up the album a bit.

Refaeinu
You know how when you daven for refuah, you just want to scream out to Hashem for help through His guiding hand? Good news! This song does it for you. It’s amazing how they capture the Refaeinu prayer in this song. These lyrics are deep, and it’s hard to live up to the meaning of the words. However, they bring out the words, voices ascending together, truly beautiful. At 3:46, you can see exactly what I mean! This is the 9th song on the album and it’s hands down the best one. If you’re still spitting out good songs by the 9th track with two to go, that shows some remarkable talent!

V’hareinu
10th song on the album, it’s got to be winding down right? Songs having a lesser impact? Nope, not on this album! Here comes another amazing fast song. Aryeh Kunstler sings the whole first round of the song (nice!), followed by the choir (nice fill!), then “Scratchy” takes over (sweet!), followed by a nice interlude with the choir doing some nice “Ooo’s” in the background (Ooo!!). Then everyone takes their turn at singing, and the mix sounds great. The song fades out into glory.

Keli
For those of you who enjoyed V’havienu 3’s somber tone, this is the song for you. It’s a great choice for a last song, almost as if they were planning for the next album to sound like this, as if they’re getting you ready for it. Main vocals in this song are Dani Kunstler’s. This song takes you out, leaving you wanting more.

Conclusion
I know, I know, I glorified this album. This is not something I always do; however, I truly feel this is an amazing album. So for those of you who haven’t bought this album yet, go buy it in your local judaica store (sitting on the older rack), or buy it here. While you’re out shopping for V’havienu anyway, go buy versions One and Three!