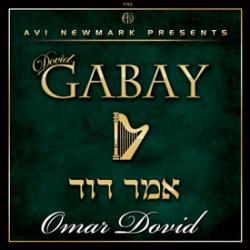 It seems like practically every week a new CD comes out. Almost every one is advertised as the most amazing album you will ever hear. Truth is, some of them really are quite good. But then the next hot CD comes out and suddenly, that’s the one that you hear in every Seforim store in town. The true test of a terrific album is not if you’re listening to it a week after it comes out. It’s whether you’re still listening to it three, six or even twelve months later.

Which is why eleven months after its release, you’re reading another review of Dovid Gabay’s Omar Dovid. While many Jewish music lovers will insist that Yossi Green’s 8th Note was the album of the year, for me, Omar Dovid wins hands down. It is a solid CD, with great songs, beautiful arrangements, top notch production and in my opinion, it single handedly raised the bar in Jewish music.

Gabay really shines on this album. He is clearly a versatile performer and his voice has only improved since LeGabay. But it takes more than good vocals to make an album stand out. So many other things have to come together. Selecting songs that are not only great compositions, but well suited to the singer’s voice and style. Finding the right people to work on each and every song. It is obvious that Dovid Gabay wasn’t the only one who put his heart and soul into this CD. Producer Avi Newmark did his job here and he did it very, very well. Topping this album isn’t going to be easy.

Which makes me wonder what Gabay was thinking when he decided to leave long-time producer Avi Newmark, who took an unknown keyboard player and turned him into a household name. Newmark put Gabay on the map with LeGabay. His eye for detail was clearly evident in Omar Dovid as it catapulted Gabay to stardom. Why on earth would Gabay want someone else producing his next album? I can only say this. Guys with gorgeous voices are a dime a dozen. What makes a singer into a star is having the right people behind you to enhance your G-d given talents. Gabay had that with Avi Newmark. Can a Newmark-less Gabay keep the magic going? Only time will tell.

No review of this CD would be complete without giving special mention to composer Elimelech Blumstein. A relative newcomer to Jewish music, Blumstein composed a whopping five songs out of eleven on this album. And every one of them is a keeper. There is no doubt that Elimelech Blumstein is on his way up.

The CD cover is simple, classy and elegant. Or in other words, another Sruly Meyer creation. Don’t know what it is, but that guy just seems to hit the nail on the head every time. The insert is the perfect example of what a CD booklet should look like. Clear, readable and uncluttered. The lyrics and credits on each song are clean and uncluttered. Neither the Thank You’s or the pictures are overdone. For anyone putting out a CD, I suggest you use this insert as your prototype.

Enough with the appetizers. Time for the main course:

Hagomel: This upbeat Yossi Green song was the perfect choice for an opener on this album. The lyrics, to the best of my knowledge, have never before been used in popular Jewish music, Ian Frietor’s arrangements are fun and I love the all-Gabay choir. Sameach previewed this song on its podcast before the album’s actual release and it gave us all a taste of just how awesome this album was going to be.

V’Koreiv: I find it interesting that if Gabay was going to choose just one Baruch Levine song that it would be a rock tune like this one. While it’s a nice song, it’s just not as outstanding as the rest of the songs on this album.

Birchos Avicha: Wow. There just aren’t enough words to describe this magnificent Elimelech Blusmstein song eloquently arranged by Yonatan Razel. Everything about this song is done right. It’s a great choice for Gabay’s voice and he does a masterful job with it. Soloist Yosef Schick, in perhaps his last performance as a child soloist, is terrific. Sixteen violins, four violas and four cellos enhance the beautiful arrangements on this song. Simply breathtaking.

Omar Dovid: Another winner from Elimelech Blumstein. This song features a beautiful passage from Gemara Makos, and the music echoes the poignant lyrics perfectly. This was an ambitious song for Gabay but he proves himself more than up to the task as he manages to give voice to the heart and soul of this emotional song. The exquisite arrangements by Leib Yaacov Rigler feature an extraordinary ensemble: aside from the usual piano, drums, bass, guitar, and percussion, there is also harp, trumpets, trombone, French horn, and again, a mega-string section.

Don Don: Another rock song, another great song and another hit from Elimelech Blumstein. Aside from being a terrific song from a purely musical perspective, it’s also a great example of how playing around a little with the lyrics can add interest to a song. Nice arrangements by Yisroel Lamm. Love the violin solo!

Rachem: This beautiful ballad by Avi Kula and arranged by Yisroel Lamm gets extra points for its beauty, simplicity and singability. While Birchos Avicha and Omar Dovid are the stars when it comes to slow songs on this album, neither is an easy song to sing. All you composers out there pay attention: we don’t just want songs to listen to, we want songs we can sing! Moshe Roth’s choir adds just the right note. Another excellent choice by Gabay/Newmark.

Zaroh: A Catchy disco tune by Yitzy Waldner, arranged by Leib Yaacov Rigler. Nachman Seltzer’s Shira Chadasha Boys Choir, who seemed to be everyone’s boys-choir-of-choice last year, does a nice job on the harmonies. I know that people complain that boys choirs and child soloists are overused but I, for one, enjoy the addition of a different voice here and there, as long as it’s done appropriately.

The Letter: This strength of this moving ballad by Yitzy Waldner is not its music or even the lyrics as much as the inspirational message behind them. Countless people have taken out their Sifrei Tehillim and begun davening for total strangers, thanks to this song. (More on that in an upcoming post.) Leib Yaacov Rigler’s arrangement are flawless and he proves once again just how much a terrific string section can add to a song.

Tana: While people have commented that the radio schtick is overused, I thought the clip of LeGabay added a sense of humor to the album and I liked it. This leibidic Elimelech Blumstein song is yet another opportunity for Gabay to shine and the song just works. Loved the ending.

Nagilah: What on earth is a darbuka? Actually, it doesn’t really matter. What does matter is that this is just another example of how thinking outside the box and paying attention to details pays off, big time. While on many CDs the last slot is where you bury your worst song, this Middle Eastern song composed by Danny Flam, Yitzy Waldner and Dovid Gabay just leaves you wanting more.

In short, if you haven’t already bought this CD, go out and buy it. Now. You won’t regret it.