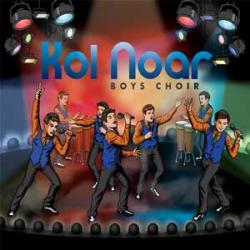 Who is Kol Noar? Who runs the choir, composes the songs, writes the arrangements, etc?

The Kol Noar Boys Choir is Directed by me, Bentzi Ptalis, and the music is produced, arranged, and written by Mo Kiss.

How many kids are in Kol Noar, what ages and where are they from? Also, what is the auditions process – how do you determine if a kid “has what it takes” to be in the choir?

The Choir is based in the Monsey area of New York and currently there are about 25-30 kids in the choir. The audition process is ongoing, and try-outs are on a weekly basis. Normally, we will ask the boy to sing one of his favorite songs as well as a ballad to get an idea of what he can do vocally. It’s usually very apparent if a child has something special, and in the case that he does, it becomes an instant feeling of excitement. Most of the children that try-out are not yet developed vocally and it will take a while before his talents shine. There are times however, when a “Child Wonder” will try-out, and blow us away with an amazing voice and talent. We have been very lucky to have a few of these incredible talents, and our album will most definitely showcase their voices appropriately.

Revealing as much as you can before it is out, what can you tell us about the upcoming album, what does Kol Noar bring to the table that has the fans and the music industry alike so pumped up about the upcoming release, and how would you define Kol Noar’s “sound” in a nutshell?

Our album will be completely groundbreaking for the Jewish Music scene. This not only applies to the actual music, but to the lyrical content as well. Hardly are there albums that are released in the Jewish Market that have a fresh exciting representation of the current styles, and our debut will showcase many of today’s styles. Melodically, the lines are soulful, inspiring, and uplifting. We guarantee that everyone will have a different favorite song on this album.

To what extent does Kol Noar use choreography in live performances and what is involved in creating and instituting it?

Kol Noar has been around for a while, with a big hiatus over the years. Now that we have finished our debut album, we will be getting ready for performances. Without a doubt, our choreography style will reflect the excitement of the music in a big way. Just like our album, you can be sure that our performances will be something special.

Who is Mo Kiss and why do so many people in the Jewish music world seem to be so excited about his involvement with this project?

Mo is an amazing talent, and has been seen a bit on some of Jewish Music’s great albums such as Yossi Green’s The 8th Note, Lipa’s A Poshite Yid, AKApella, and on a handful of other projects. Ask anyone who knows him, and they will tell you it’s hard to say where he shines most. He is an accomplished musician, playing guitar, piano, keyboards, and studied Music in an esteemed Conservatory in New York. He also has one of the most soulful voices in today’s music industry, and has been featured on many secular recordings. If you have had the opportunity of seeing him perform, you will most definitely have walked away with a piece of his heart. Besides producing and arranging the music on this album, Mo has also written many of the songs as well. For all that have heard some of his work and yearning to hear more, this album will deliver!

How did you meet Mo and what was the joint vision that led to the formation of Kol Noar?

We met through my brother Dovid, who was a flatmate of his in Yeshivas Bais Yisroel in Israel. My brother would not stop raving about “this roommate who’s got this sick voice – you gotta meet him”. They were best friends for many years before Israel, and then I eventually met Mo when he returned to the US with my brother. He had been writing music and was playing the tunes on a keyboard in my house. Actually, one of the songs he played was Al Tirah, which became very popular because girl’s schools were calling to use the song on productions over the years. The song is featured on our album, and is a throw-back to the classic Boys Choir harmonies you rarely hear these days. Mo and I immediately became best friends and he brought me into his music world. As a child, Mo was in the Tzlill Vzemer Boys Choir and was actually reuniting with Avrohom Rosenberg to play his songs for him. I decided to join, and Mo and I actually became extremely involved with Avrohom and his choir for a few years. Eventually, Mo and I decided to take our ideas to the next level, and start our own Boys Choir.
If any of this history slightly interests you for some bizarre reason, you can actually read more on this on www.Kolnoar.com.
For the rest of you; get your headphones and speakers ready!

What do you think was the number one factor that made Sameach excited about signing Kol Noar?

Although we have a suspicion it might be as a result of hearing some of our slamming music, you will have to ask Sameach! :-)

Tell us about Kol Noar’s target audience? Who will most enjoy what Kol Noar has to offer?

Obviously the children will love Kol Noar. However you need to be aware that this album is for ALL AGES! The music and melodies are crafted in way that the adults will be the first ones to pop Kol Noar into the CD deck! We guarantee that this will not be an album that will make you moan in agony when your children beg you to put it on.

Tell us a little bit about the logistics end of the operation. It must not be an easy task transporting, feeding and transporting the kids for performances and recording sessions.

It most definitely is hard work. Don’t forget, the kids come to the studio after a long day in Yeshiva. We are aware of this, and try to give the children a fun environment where they can appreciate music and have a good time. We have the best Choir Parents in the world, and they love the music as much as we do. Therefore, recording sessions are fun.

What has it been like for you and Kol Noar to work with some of the biggest talent in Jewish music such as MBD and Lipa Schmeltzer?

We all enjoyed every minute of it! Its fun to be able to lend your voices and talents on different projects. The boys enjoy the thrill of performing with legendary singers, and MBD and Lipa were no exception.

Any concerts set up for the near future that you can share with us?

Uhh Uhh Uhh – No Scoop for you!  lol we will let you know when the time is right……

Where is the new CD holding and when can we expect the debut release?

We are mixing the music now, and are working on the artwork for the CD. Fun Fun! Our album will hit the shelves at about Purim time of this year!

Yes! Please go out and buy a copy of Kol Noar Boys Choir Debut Album proudly distributed by Sameach Music! We are asking that you give our music a chance, and let it go through your body and soul! We worked very hard to take you through a fresh and inspiring musical journey, so please support us and your local Judaica Store!
If you live somewhere out in Nowheresville, you will be able to purchase our album online at  www.jewishjukebox.com, www.mostlymusic.com, and www.kolnoar.com!