Today I’m going to be reviewing a newly released album entitled “Fixing the World” by singer/songwriter Yisroel Juskowitz. I’ve been privileged to play live with Yisroel on a number of occasions and I can tell you that he is truly a talented musician and a real mentsch as well. After thoroughly enjoying his first album “The Narrow Bridge” I’ve been waiting to finally hear his 2nd album. Now that I’ve spent more than enough time listening to it, here’s my review:

If you’re looking for the latest hit songs that will be played at Simcha’s or the vocalist who can pull off the most shtick within a song this may not be the album for you. However, if you appreciate good compositions and good music and enjoy music that not only touches the ears but the heart, then you’ll want to get a copy for yourself! This album is available at your local Judaica store as well www.MostlyMusic.com, and many other online music retailers. 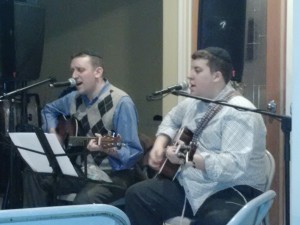