Baltimore, MD – Nov. 25 – The two previous D’veykus concerts at Shomrei Emunah were such a success, that those who planned the 3rdreunion knew they had to make it bigger. The concert committee included: Natan Berry,Kenny Friedman, Avi & Sora Greenlinger,Bonnie Pollak, Stuie Schabes and Chaim Wealcatch. Shomrei gave special tribute toChazan Chaim Gartenhaus for his 25 of years of service as Chazzan for the Yomim Noraim.

As I have written in my past two Dveykus articles, there is no concert quite like a Dveykus Reunion Concert, and this year, it was even bigger & better! The concert was held in Beth T’filoh with a crowd totaling 1,300!  YES! One thousand three hundred people.  As Kenny Friedman put it, “It was a difficult decision to change the venue from our beautiful shul, but the demand was so great for the last concert, we felt it necessary to allow the greatest number of people to have this experience and receive this chizuk. B”H we sold well over 1,300 tickets this year.”

Joining the cast of Abie Rotenberg, Elli Kranzler, Yussi Sonnenblick and Rivi Schwebel was Shlomo Simcha! The musical director was the one and only Nochi Krohn with Baltimore’s Zemer Orchestra 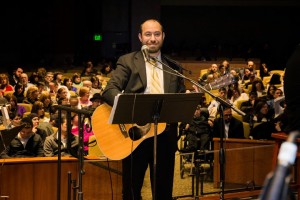 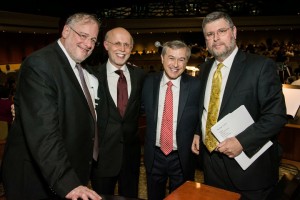 featuring, Nossi Gross on flute, Alfredo Mojica on percussions, Gerry Kunkel on guitar, Gary Honickon bass, and violinist Yonatan Grinberg. The crowd was given a taste of Dveykus, Journeys and Aish.

The show began with the night’s MC Dr. Kenny Friedman who introduced the night’s opening singerShlomo Simcha. Shlomodazzled the crowd with his sweet and tremendous range singing R’ Shlomo Carlebach’s Yachad and Moshe V’aharon with a combination of chazanus and song.

Abie, Eli, Yussi and Rivi took the stage and wasted no time piercing the neshamos of all those in the crowd singing Kol Dodi, Kol B’rama, Shma Koleinu, and Hinei Anochi. Then in a very special moment, the honoree himself, Chaim Gartenhaus, joined Dveykus in singing one of Shomrei Emunah’s favorites,  Ani Maamin. After a heartwarming speech by the honoree, Abie introduced Acheinu. He noted that this song has recently been song by yidden across the world in response to unfortunate tragedies. He asked for the audience to sing along and to pour our neshamos out.

Chaim Glazer had this to say, “I wish they would have continued for another 2 – 3 hours. As one of the singers stated, they sing tefillos. R’ Abie’s songs are classics because they are real and everyone there knew that, appreciated it and left uplifted. Their choices of songs were connected to current events over the past year and it made a roshem on all of us. I brought my children to show them what real and meaningful Jewish niggunim are like.”

All of a sudden, we had a mood change, the group starts speaking in yeshive leading into Yeshivishe Reid with an added verse for the Baltimore community:

Ever since the town of Lakewood, Began to shteig and vaks-ois

But one place was Ba’Zunder, It was Yashrusdik and Klahr

Yeshivish it spread out everywhere… Except to Baltimore

I have to Moideh al HaEmes – I got it Derech Twitter

To hear Yeshivishe is now spoken – In Yeshivas Ner Yisrael

Prior to the intermission, Kenny read a letter written by the Gartenhaus’ children from Colorado, Israel and New York who were unable to attend Sunday night’s event. Rabbi Binyomin Marwick, RAv of Shomrei Emunah, then presented him with a beautiful menorah with a Shamash in the shape of a Shofar which is symbolic of the Yomim Noraim.

After the intermission, Abie and Shlomo Simcha opened with a beautiful rendition of “Conversation in the Womb”. As Rivi then joined them on the stage, Shlomo Simcha reflected on the terror in Har Nof of the past week and mentioned that he was taken by the coverage of the shul the day after. The sound of Kol Torah emanated with great fervor and passion and with this, Shlomo and Rivi sang Habeit with every ounce of their hearts.

Natan Berry, a member of the concert committee said, “Where else can you get such a great group of talented singers to sing such meaningful songs?”

Yona Openden said, “It was an uplifting evening filled with inspirational music… heartfelt music that touches the neshama.”

It was then time for more D’veykus. Habein Yakir Li, Proik Yas Anach, Shalom Rav, Lakol Zman Va’Ais and Naar Hayisi. The last songs of the night were V’lirushalayim and R’ Shlomo’s Uvnei with the hope, as Elie Kranzler said, that we can yet again enjoy a safe and secure Yerushalayim.

To the concert committee – we can’t wait until they come again!