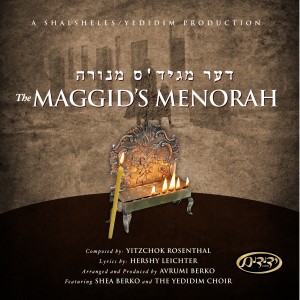 Chanukah:  you can feel it in the air.  Amid the smell of sizzling latkes, the joyous notes of Maoz Tzur and the hopeful glow of the menorah is the knowledge that more than anything else, Chanukah is a season of miracles.  Just in time for Chanukah comes an all new single, a joint collaboration by Yitzchok Rosenthal of Shalsheles and the Yedidim Choir, a beautiful Yiddish song telling the tale of the legendary menorah of the Koznitzer Maggid.

The story is told about the Koznitzer Maggid, Reb Yisroel Hopstein, whose daughter, Perela, lost several children, and the Koznitzer beseeched the gedolim of his time to bless his daughter with healthy children.  The Berditchever Rebbe came to the Koznitzer and asked him for his precious, heirloom menorah and upon receiving the menorah, the Berditchever Rebbe pronounced it as a wedding gift to the as yet unborn son of the Maggid’s daughter, Perela.  The Berditchiver’s words were fulfilled and years later the menorah was given to that same child upon his wedding. The menorah was eventually returned to the Koznitzer Maggid, and it was passed down from generation to generation, with stories of miraculous happenings through the menorah continuing to be told until today.

200 years have passed since the Koznitzer Rebbe’s yahrtzeit and today, the Koznitzer Rebbe, Reb Shimshon Moshe Sternberg, lights that same historic menorah on select nights of Chanukah.  The Maggid’s Menorah, a magnificent Yiddish song  composed by Yitzchok Rosenthal, produced and arranged by Avrumi Berko, featuring lyrics by Hershy Leichter  and vocals by Shea Berko and the Yedidim Choir, brings the story of the Kozhnitzer Maggid and his miraculous menorah to life.