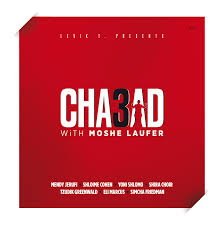 Moshe Laufer has now released his third album of Chabad niggunim in partnership with Levik Touboul, and fourth overall (in addition to being the arranger for Avraham Fried’s first two Chabad albums). I have had the pleasure of reviewing the other 2, so here’s #3, the chazaka! As is his modus operandi, the albums rely heavily on a string section with spot solos to brass, reed and guitars. The sound quality is high; the choice of vocals is good. Eli Marcus, in particular, shines, joining his uber-talented family of stars. The choral sound overall is excellent. And most importantly, the selection of niggunim is great – a mix of unknown and barely known, with a few familiar hits as well. This album is quickly becoming my favorite of the series, owing to its balance in all the above. Now, let’s go through the pieces one by one.

Niggun Chassidei Maharash: **** A comfortable simcha rhythm sets the tone for this niggun, one from the time of R’ Shmuel of Lubavitch (passed away in 1866). Eli Marcus sings comfortably and naturally, and the orchestration is a perfect match for the melody – giving it sufficient bounce without overwhelming the innate personal joy it delivers.

Korati Bris: *** As one of the birthday niggunim, this tune was composed in honor of the Rebbe’s 88th birthday in 1990. It’s oneof the less known of that grouping, and it’s therefore great to see it included here. Yoni Shlomo, a French vocalist who has his own album of Chabad Niggunim entitled “Shamil”, gets a bit fuzzy occasionally on the 3rd section, but it’s not ruinous by any means. In the arrangements, a great hook makes for a great bridge, but the sax that follows at 3:24 is a bit flat, especially as the song is just then picking up. All that nitpicking aside, it’s a good production of this little-known niggun.

Becho Botchu: *** The gentle intro to this beautiful song has Laufer written all over it (Essen Est Zich from Hupp Cossack, Yemin Hashem from Music of the Lubavitcher Chassidim, etc). Mendy Jerufi takes the lead here, and does it with aplomb, enunciating every kneitch with feeling. I love the humming over the mandolin at 2:44; not so much the trumpet that preceded it or clarinet after; the former expresses the feelings beautifully, while the latter venture into somewhat foreign territory.

Nigun Rikud: *** Great niggun, but the child soloists here could have gone through a few more sessions, as they comes across a bit weak and unpracticed. If they were looking for a more natural sound, they may have hit that, but I’d have worked the kids a bit more, as they have good voices. At around 3:00, the niggun kicks up a notch. I’d venture to say that by this point, you’ll be humming along with Yoni.

R’ Chonye Marazov’s Nigun: ***** A stunning tune written by the venerable Chassid and secretary of the previous Lubavitcher Rebbe is given wonderful expression by Shloime Chohen. As for the arrangements, the unserious electric guitar didn’t belong there; methinks it should have been swapped by the more contemplative strumming mandolin used in Becho Botchu or the acoustic guitar that appears later (3:50). A niggun like this is what davening is all about.

Hakhel Medley: ***** Two great tunes that match the theme and spirit of Hakhel year, the year following a Shmitta. The Rebbe instituted mass gatherings in the spirit of Hakhel across the entire year, and these niggunim were composed/adapted to be sung at those occasions. As a result of it happening only every 7 years, the tunes are not well known, so it’s great to have them produced for mass consumption.
Hakhel: The children’s choir fits the theme perfectly, and the vocal arrangements are mixed nicely.
Hinei Haviosim: An older Nigun Simcha was fitted with these words, and here a hora beat gets things moving. Vocals here are perfect for the tune, everyone matching their places perfectly. The pace is quickened to the simcha beat towards the end to great effect.

Lecho Dodi: ***** They got me here – not only did I not know this niggun, to my ears, it doesn’t even sound like a Lubavitcher niggun; rather, more something of the Bobover or Belzer dynasties. And in fact, consulting the liner notes, it is indeed a Lomzher niggun that was brought to Lubavitch later. The waltz has a broad, full symphonic arrangement produced masterfully, and Tzudik Greenwald does a stirring job with it on the vocals.

Nigun Simcha: **** A well-known, truly lebedik niggun that’ll probably lead you to dancing; and again, Shloime Cohen exhibits the feeling and energy without a hitch. From his perspective behind Cohen, Laufer tacked on a nice hook. Great ending.

Nigun Shabbos V’Yom Tov: ** My one gripe: This well-worn (but gorgeous) tune has had dozens of productions – what need was there to have another one? (In my collection, I have it produced by Mona Rosenblum, MBD, JEP, Andy Statman, Drive Acoustic Group, Moshe Kravitzky, and Halev Vehamaayan.) As always, Eli Marcus does an excellent job, but with hundreds of other tunes that could be shared… (And in the liner it’s titled a Nigun Gaaguim… Oh well…)

11 Nissan Medley: ***** Another top notch collection of songs, a best-of grouping of medleys composed or adapted to the Rebbe’s birthday (which is, of course, the 11th day of Nissan).

Yifrach: One of my all-time favorites, sung by many communities during Lecha Dodi. The vocalists take it all the way, with Laufer’s work an excellent basis to the energy of the rocking niggun. (Although my all-time favorite performance of this tune would have to be on Let’s Dance with the Piamentas.)

Roeh Yisroel: An older, fist-pounding niggun was adapted to these words, although the words get a bit stretched.
Yeilchu 1: Another energetic sizzler of a niggun, that I only wish had more time spent on it. It’s too good to get a bit showing, especially considering the excellent work on the vocals.
Odcha: Slide back into hora-beat for this bouncer. The children’s choir doesn’t quite match the energy put out by the soloists.
Yeilchu 2: You may recognize this as the tune Berry Weber made into a smash hit: Chabadsker Niggun, or as it was known in the slower version, Niggun Talmidei HaTzemach Tzedek. And towards the end, the crew quickly drops the somewhat bulky words.

Shuvo: ***** I don’t know if Laufer or Touboul read my last review, but perhaps the feeling was not just my own. I had written that this masterful production of this fantastic niggun was in need of vocals. And indeed, here it is! All that needs to be said is, besides for the fact that Jerufi and Shlomo did brilliant jobs putting out the oomph it needed, thank you!

All around, another excellent showcase of Lubavitcher Niggunim. Moshe Laufer has his system that works well for him, and occasionally he draws on that too much as opposed to letting the niggun play itself. That’s a common issue with niggunim CDs, because niggunim were not made for consumer consumption; rather, they are a spiritual vehicle. That being said, he has done a stellar job at introducing niggunim to the velt-at-large, and Levik Touboul keeps bringing out his best. I’d like to know what happened with Menachem Levy, though, as I thought he had done an excellent job as the soloist on Vol. 1. Too bad they couldn’t bring him back. As always, a yashar koach – some day soon, we’ll be singing these tunes in the 3rd Beis Hamikdash.