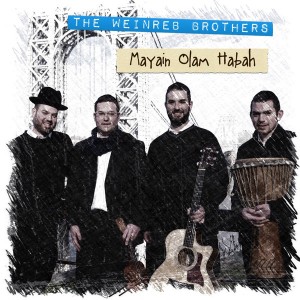 Hey everyone! Today I’ll be reviewing the new album from the Weinreb Brothers. Instead of boring you with my usual long prefaces, lets jump in!

10 Hinei Kumzits – Although you may have heard the Carlebach Havdala before, this is a beautiful rendition. As much as Mendy’s vocals help carry the songs, when all the brothers sing together you’ll find that they aren’t just all musically talented, but they’re vocally talented as well.

All in all this is definitely not your typical Jewish music. The Weinreb Brothers provide us with a great sounding diverse album. Buy this album for the person you forgot to get a Chanuka present for and you’re sure to get back in their good graces!