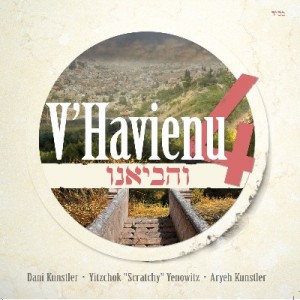 I’m going to start off this review with a bit of a confession. That confession is that I am not familiar with the majority of the V’havienu material released before this album. I guess the first 3 albums (other than a few songs) slipped under my radar and unfortunately I was not privileged to be able to listen to them when they were first released. That being said, I’m extremely excited that I finally decided to see what the fuss was about! This album is awesome! I can keep going on and on about how much I enjoyed this album but I’ll have some mercy and start the review already.

All in all, if the previous V’havienu slipped under your radar (like it did mine) you may have bought this one already just because of the cool looking cover design (Designed by Daniel Goldstein of Solid Gold Studios) or because you spotted the name “Kunstler” on the front. If you hadn’t gotten it yet ,rest assured you will be extremely satisfied quality of the compositions, the vocals, arrangements, and the rest of the production involved in the making of this album.