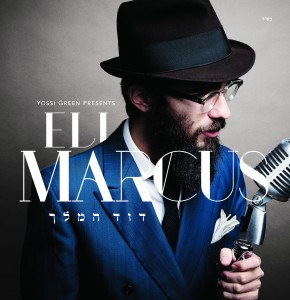 You may have heard the last name “Marcus” before. Bentzy and Shmuli Marcus of 8th Day lit up the Jewish Music world with their diverse styles and insightful lyrics. Currently however a new “Marcus” is making his way to the stage. Eli Marcus, brother of Bentzy and Shmuli, nephew of Avraham Fried, and cousin of Benny Friedman has just released his first album! This album is sure to separate him from the family as he creates a new name for himself with his own signature style. Lets get started on the review!

To sum up my thoughts: Many times when a sibling or relative to someone within the Jewish Music world decided to pursue a musical career there is a lot of curiousness as to whether or not the sibling or relative is up to the task. In this case regardless of any family connections Eli shines vocally. Many can attest to his energy out on the Simcha-circuit as well. After listening to this album there is no doubt that Eli’s musical career will only grow from here on out. I am definitely looking forward to hearing more from Eli and after you purchase and listen through this album, you will too!