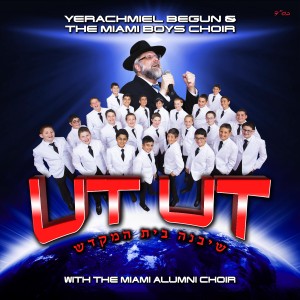 7:12 pm on Chal Hamoed Pesach, April 8. Where does that find me? In a car service enroute to Brooklyn College. Anticipation running high, I almost jumped out of the car, driven by some rookie cruising at 20-25 MPH.  Anyway, I finally arrived with enough time to spare; found my seat ( Center front- 12th row), and sat back to enjoy the show.

The concert started at about 8:00, only 15 minutes late. The Shirainu Orchestra, led by Gal Garshovsky on drums commenced with a medley of songs off the new hit album “Ut Ut”. The crowd was pumped, clapping along to the beat. Yoely Kar (His mike crackling) came on soon thereafter and introduced the first act: Nachas who did a medley of Miami Moshiach, Hashem Melech and Et Rikod. He had great energy and was very good.

Following on his heels, Yoely Greenfield strolled in to Miami’s classic Yaleh V’Yavoh. After that he did Revach. His voice and range were awesome.

And then they were gone for the night.

Next up was the amazing Miami Alumni Choir, comprised of ten guys, most of them from the Revach era: Jordan Odinsky, Jonathan Brody, Yoshi Bender, Daniel Muchnick, Doron Levine, Zalman Pollack, Shlomo Golumback, Gershi Adler, Zalman Levin (From way back) and Daniel Gober (From Light Up The Nights). They started with an oldie. ‘Asher Bara’ off ‘ The Simcha Song’. Great energy!

After that, Jordan Odinsky introduced the next song, saying that it was a song they all opted to perform, the beautiful Nekadesh. The group sang it very well with some great harmonies that reminded me of the rendition on the Miami Yavoh DVD.

By now we were all pumped for the main act of the evening. Yerachmiel Begun and the Miami Boys Choir! Someone next to me was screaming her lungs out and the crowd erupted in cheers.

The boys, wearing white shirts, shiny green vests and suit jackets danced into to the pumping “Leibedig!” The choreography was awesome and on cue. They were fresh and tight and just awesome. Yerachmiel appeared after that, saying, “I was watching from behind the scenes on a mini screen and just wished that I was sitting in the audience. Another round of applause!” And we enthusiastically complied.

Following that the boys did a medley of ‘Devai’ (Real oldie. They did it with the original choreography :) , ‘Mitzvah Gedolah’ off ‘Stand Up’, and ‘Yavoh’. Soloist Benny Zada rounded it up with a high note. ” Moshiach Hasheeeeeeeeeeem, Hashem!”

After doing the dance moves the boys needed a break. Stools and chairs appeared and the boys sat down for a Kumzitz. They sang “Tzur Yisroel”, one of my favorite songs of the new album. It starts off slow and gradually builds up. The soloists were the same as on the album. Tzvi Simchon, Avigdor Gluck and Dovid Pearlman.

The next song was sung by a group comprised of the younger kids in the choir: Benny Mann, Isaac Balasiano, Isaac Hassoun, Dovid Harel, Shlomo Gross, Shimon Yitzchakov and Benny Zada. They were all strumming on plastic guitars. The rest of the choir joined for the bridge and the final chorus. Very sweet.

The boys then launched into singing the beautiful Pitchu Li. The harmony was top notch. They were really into it. Dovid Pearlman’s solo at the end was beautiful.

After the soulful Pitchu Li the boys went out and marched in to ‘Sameach’. The choreography was REALLY GOOD, high energy and constantly changing. At the end they did some wedding shtick. A few kids doing a human pyramid,one kid on a unicycle. The atmosphere was electric. Loved it!!

After the break Yoely Kar called up the founder of Jroute Radio, Rabbi Nissim Lazari who thanked Yerachmiel for doing the concert on Jroute’s behalf. (It was great seeing him live, as I’m a avid listener of the radio.) With that said, Yoely then called up his friend and Radio host Elchanan Hamada who introduced Acheinu- The Shapiro brothers. Classic! They sang a medley of ‘Al Tira’ (Toronto Pirchei) ‘Horeini’ and one more song.

Following them were the popular Zemiros group. They sang ‘Mi Adir’ off Revach. Yoely Polatscek mentioned that they sang this song at Chananya Begun’s wedding. (Everyone turned around to the soundboard- and Chananya waved :)

I’m not sure exactly when, but at some point the Alumni were back with their debut song off the album, ‘Invei Hagefen’. There were some pretty duets.

After that the whole bunch was back for V’shum. Pumping. Loved when Dovid Pearlman got up on a chair and did his solo exactly as he does it on the album. My SD card was maxed out :( and I don’t really remember the choreography. (And I don’t remember the order of the next few songs either)

Thrown in somewhere, was Im Eshkocheich off ‘Stand Up’. Dovid Harel sang the high note at the end very well.

The mindblowing ‘He Will Answer Us’ was performed by Tzvi Simchon and Dovid Pearlman. Tzvi did Orie Shaked’s solo, with Dovid coming in for the second stanza. For the bridge, Tzvi turned into the center and then both boys sang together until the end. Beautiful!

Boee Kallah was performed exactly as it is on the album with the exception of a duet between Michoel Weingarten and Dovid Pearlman. The duet in the beginning by Chaim Golovan and Avigdor Gluck was gorgeous.

It was close to 11 PM and I knew that the finale was inevitably coming up :(. The concert concluded with the smashing UT UT. Loved the part where the music stopped for a few moments, (somebody ruined the silence by calling out) and then started again.

After the finale Yerachmiel, The alumni, the boys, Zemiros and Nachas joined hands for a dance (Mitzvah Tantz sort of). The audience stayed seated until the music stopped. Nobody wanted the night to end.

While waiting for my ride home I spotted some choir boys and their proud parents and some (non-performing) alumni. Yerachmiel didn’t show up though :)

Here are some factors about the concert that stood out:
1) Each song off UT UT was performed. A real treat.
2) Every boy had a solo.
3) The choir sounded AMAZING. Live.

So there! See you at the next one in Yerushalayim IYH!