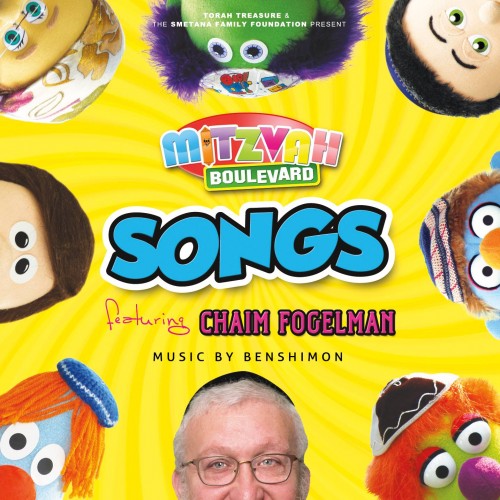 And they’re back with an all new…um almost new…

Fans of the popular Mitzvah Blvd DVD series will spot something new on the shelves…but wait, it looks different!

Torah Treasure presents Mitzvah Blvd Songs CD! Now available wherever Jewish music is sold. Producer, Chaim Hershkowitz explains that over the years he would constantly get asked about putting all the songs from the first 3 Mitzvah Blvds DVDs on a single Audio CD. “As I was walking back from Fitche Benshimon’s studio with the finished CD in my hand, I got a text from an old friend asking about putting the songs on CD. I finally was able to say give me a few days.”

The CD features the talented Chaim Fogelman singing all 21 songs from the Mitzvah Blvd series. “Chaim has a way of singing that is both clear and joyful.The songs took on another dimension than just the DVDs,”  says the other Chaim. Infused with Mitzvah Blvd flavor, the cast of puppets add some nice commentary between the songs.

Special thank you to Dovid and Malkie Smetana for their continued support to make this all happen.