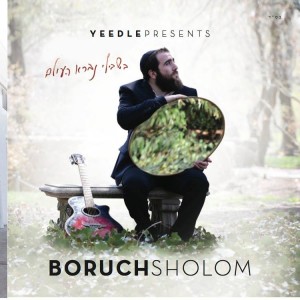 @SPLASHNEWSUSA  -Boruch Sholom is here with his long awaited debut album. This great composer has already been feautured on Yeedle’s latest album- “A Verdiger Yeedle” where he has three songs. It was Yeedle who discovered this guy and in fact he’s the one who produced this album. “Bishvili Nivra Haolam” is an album loaded with talent and can be enjoyed by anyone that appreciates good music. The songs are very diverse and full of the unexpected. Boruch Sholom is not afraid to use his voice in out of the box ways in order to enhance his album. The album belongs to him and Yeedle and they did not let others dictate how they are “supposed” to do things. That is why this album is special. The music is creative from beginning to end; there are plenty of extended music interludes throughout the album whereas on other albums, interludes are generally kept as brief fillers. They were not afraid of sometimes letting the music take over for a minute and thereby upgrading the quality of the song. After all, an album is not only about the vocals but is also defined by the music itself. Boruch Shalom’s sings this album in a laid back sort of way and sounds relaxed while still powerful. This is not something I hear too often and it gives the album a “chilled” feel. It is really an awesome album all around. To quote @YossiGreen “Best way to listen to this CD, don’t look for favorite tracks! Just listen and then listen again”. Here’s my take on the songs which were mostly composed by Boruch Sholom and arranged by himself together with Yeedle and Eli Lishinsky as well as Nir Graf-
1. Bishvili– Album starts off with the horn of a fire engine which tells me that this album is not gonna be something I’ve heard before and anything can happen. This three part song could really use a second listen before you can fully appreciate it. We get nice a vocal curl at 1:59; this is where we start seeing that Boruch Sholom is really not afraid to use his voice in many different ways. Really cool bridge at 2:45; this is what I mean about extended interludes. It really adds to the song. The song sounds like it’s ending about 4 minutes in but then continues with a jazzy sax solo for another minute. The songs ends with this long music bit and leaves a good taste in your ears. (Does that make sense?) Co-composed by Levi and Boruch Sholom Blesofsky. 3 ½ out of 5 stars

2. A Gutta Voch– This track was co-composed with Lipa Schmeltzer and may be my favorite song on the album. It starts off with cellos in staccato fashion and is quickly joined by the slow rock beat. It is a really good driving song. Preferably with a convertible driving down the Pacific Coast Highway, or in the tri-state if you’re stuck here. This song is full of great simple backup vocals and harmonies. I especially like the Sephardi style harmony at 2:06. You will not tire of hearing this one. 5 out of 5 stars

3. Tefilah L’emoishe– This starts off with a nice flute solo for about a minute and then Boruch Sholom comes in for the low with some really smooth vocals. This is an old school Jewish song that can easily be on any old MBD album. In fact, if you pay attention to the vocals, Boruch Sholom sounds like a mix of MBD and Yeedle in many places throughout this track. I love the falsetto at the end of the first low. Yeedle says this is his favorite song. Which is impressive because most singers/producers lie and say “they’re all my favorites” when asked that question! 4 out of 5 stars

4. Lo Yemalet– This catchy track is the song that heard a while before the album was released and it’s what gave me the craving to hear the rest of the album. I can safely say that this is the first song that start off with a horse solo. You read that correctly, this album features a horse a couple times, (American Pharoah?) as well as much gunfire. This is a very good arrangement and there are many highlights in this song and I can’t write them all but I really like the interlude and the cantorial vocals towards the end. And of course the horse. 4 out of 5 stars

5. Time In My Life– This is a fast electric song with English lyrics written by LIPA. His college classes look like they paid off. This is not my favorite song but it definitely adds flavor and diversity to the album. I was not prepared for the rap at 2:45 which is lends nice contrast to the song. 2 ½ out of stars

6. Screaming Your Name– This is a powerful English slow song with awesome music and vocals. The lyrics were written by LIPA for this song as well together with Chani Garelick . Co-composed with Yeedle. This song features guest artist Shulem Lemmer who does a fantastic job on the vocals. The lyric itself has very strong message and is dedicated in memory of the Kedoshim of the Har Nof massacre. Great arrangements by Lishinsky and Nir Graf. 5 out of 5 stars

7. Shuva– This is a classic Chabad song composed by Rabbi Feitel Levin and I believe it was featured on Chabad 3 by Moshe Laufer. It’s a great song for all occasions and can easily be used for any Chasunah. The arrangements by Mona were kept pretty typical which is perfect for this type of song. I love the excellent use of horns throughout the song. Very enjoyable listen. 3 ½ out of 5 stars

8. Hisnari– This is a soulful slow song. Boruch Sholom sings it with a lot of passion and feeling. He wrote it shortly after the passing of his mother and it is dedicated to her. I’ve heard from people that have heard him sing this song at a chasunah and the consensus is that it’s a first rate quality song and that he also sounds great performing it live. 4 out of 5 stars

9. Shmoozen– Starts off with Zevi Fried on the phone with a cool beat in the backround that quickly picks up tempo when the low starts. This song has a lot of contrast from the fast tempo disco low part to the slower paced rock high part and in the vocals as well. You have the deep voice of Zevi Fried coupled with Boruch Sholom. This is a straight Yiddish song with the lyrics written the best in the biz- LIPA. I like the high a lot better than the low. 3 out of 5 stars

10. Vayechulu– This awesome three part song is the favorite of many including myself. It features Yeedle and is really the epitome of this album; it’s different but not too different, lots of contrast, plenty of ‘music only’ time, great musical solos, and very laid back. I can (and do) listen to this song over and over again. This song leaves you wanting more of Boruch Sholom which is what a good ending song should accomplish. 5 out of 5 stars

As always thanx for reading and feel free to leave your comments down below or email atsplashnews.jmr@gmail.com –You can also get all our music related news on Twitter @SPLASHNEWSUSA