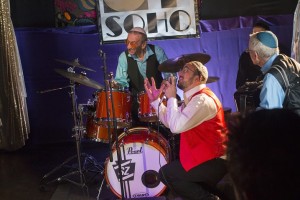 In the ultimate celebration of life, the Holocaust Survivor Band debuts in their first music video, sharing the spotlight with Chasidic superstar Lipa Schmeltzer.

The Holocaust Survivor Band is comprised of 90 year old drummer Saul Dreier and  86 year old accordion player Ruby Sosnowicz, both of whom lived through the atrocities of World War II. The South Florida retirees began performing live in the summer of 2014 and have appeared in venues ranging from local nursing homes to the Last Survivor concert at The Venetian in Las Vegas.

In this their first video, the Holocaust Survivor Band performs a cover of the classic Yiddish song Shain Vi Di Levone.  Dreier and Sosnowicz are accompanied by Schmeltzer, who plays the part of a reluctant nightclub waiter and the musical trio electrifies the entire room with their energy and enthusiasm as they breathe new life into this timeless composition.

Composer Cecelia Margules, who updated the original song by the Barry Sisters with new music and lyrics, discovered the Holocaust Survivor Band last fall after seeing a flyer for an upcoming performance  while shopping at a kosher grocery store in Miami Beach.  Margules made the trip to see them live and immediately recognized their talent and potential as a means of shining the spotlight on the positive lives and spirits of Holocaust survivors.

Shain Vi Di Levone was produced by Margules and directed by Daniel Finkelman of SparksNext, with musical arrangements by Ruli Ezrahi.

“The Holocaust Survivor Band is such an inspiration,” said Finkelman.  “They have so much vitality and embody the spirit of Holocaust survivors everywhere who triumphed over the darkness in their lives, replacing it with light and with happiness. They are role models for all of us.”