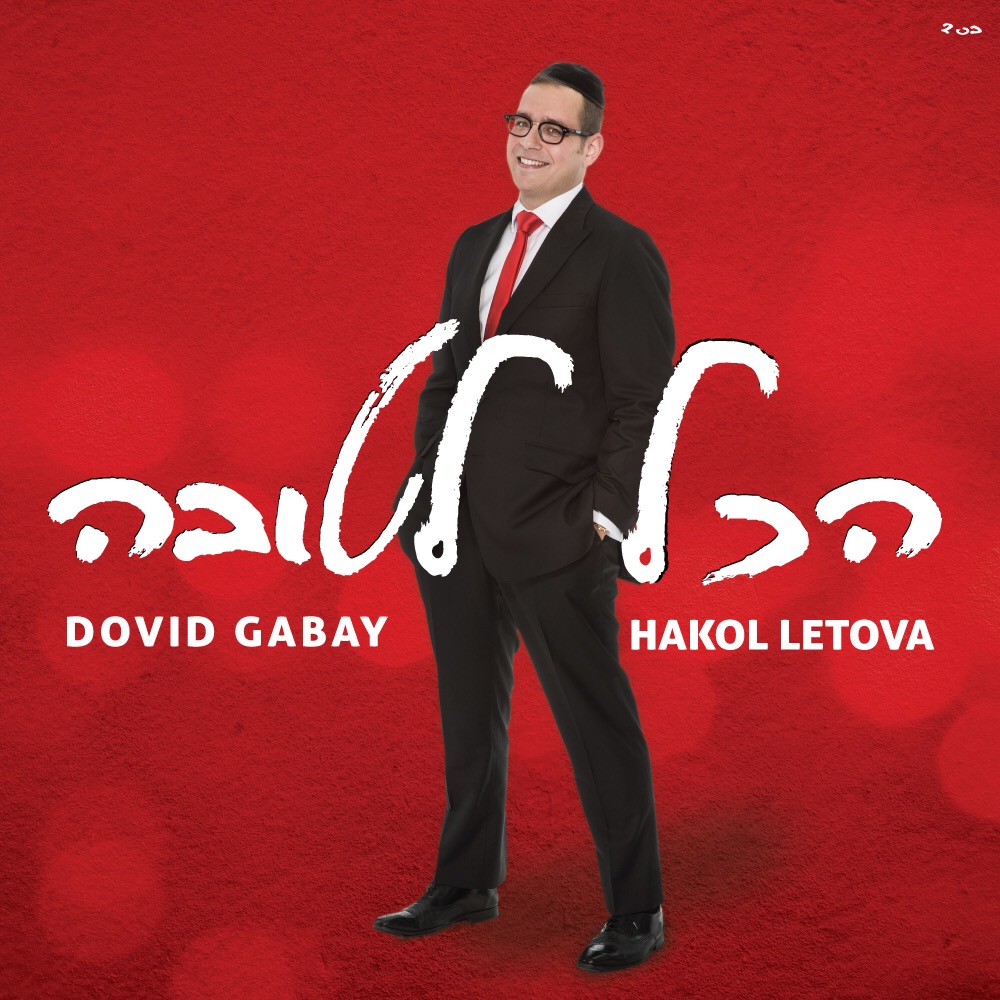 Dovid Gabay started in 2006 with his hit album Legabay, which featured Sois Asis, Ma Tovu, Tamshich, and the title track Legabay. 2 years later, we got Omar Dovid, with hit songs such as Hagomel, V’koreiv, Birchos Avicha, The Letter, Zaroh, Don Don, and Nagilah.

Then Dovid came back with his 3rd album Eretz Yisroel, which wasnt quite as good as the other two in my opinion. It featured songs like B’Simcha Tamid, Berum Olam, Ha’aderes, and Vehu Yishlach.

Finally a single 4 years later was put out called Borei Olam and an announcement of a new album followed.

So now we have the album, titled “Hakol Letova” produced by CD Eichler and Sruly Meyer. Great urging 10 songs. Lets review it.

We start with Hakol Letova, composed by Mordechai Brezel. The lyrics came from Miriam Israeli (the Yesh Tikva lyricist). This song is a pumping song that I find myself listening to all the time. It’s got that new wave beat that all these new songs have with the voice fade out and autotune and all that stuff.

The next song, Shir Ha’achdut, was dedicated to the 3 soldiers who were kidnapped and killed by the Arabs last summer. This song was composed by Itai Amiram, and the lyrics are way past my limited Hebrew knowledge. Though I don’t really understand, its still a gorgeous song. The low part reminds me of Shwekey’s Tefillat Kallah.

The third song on this album, Oizer, is a great song, fast and fun, a bit like Borei Olam. It was composed by Dovid Kaufman and contains a lot of the new fun shticks (like what sounds like a guy hitting a bottle throughout).This song could be played at bar mtzvahs all over the country soon.

Next up is possibly my favorite song, Moneh, about how people run and work for money, but don’t realize they’re wasting their time. Composed by Shua Bitton, and produced by Bentzi Marcus of 8th Day, it’s actually a song that’s really up their alley, but I like Gabay singing it as well. Really good song. I love how the Hebrew and English lyrics go smoothly into each other and Dovid does a great job making both languages fit perfectly.

Hamalach is a haunting slow song that includes child soloist Simcha Schachter. It was composed by Rabbi Moshe Rotberg, and although I dont like most slow songs, this song I gave a second listen to.

We get to Nelech, a song that takes 4 different pesukim and connects them (not sure how, they’re all from random place). It was composed by Yitzy Berry, and is a very excellent song. It reminds me a bit like something MBD may sing. Top 5 song on the album, definitely.

V’Nizkeh is a fast song composed by Yoni Alayev. Its about Moshiach and comes from Shachris, at the end of Uva Ltzion. I enjoyed it, but not too much.

Odcha is up next. This slow song was composed by Motty Illowitz, who recently put out his own debut album. It’s a gorgeous song from Hallel, that shows us why Gabay was at the top of this game back in the ’00s.

Track 9 is Osin Teshuva. This song came out as a part of the Inscribed CD and was the hit song of that album, so there was no question of whether to put it out again on this CD. The music is new, I believe, and it was composed by Elie Schwab and is in the Top 5 of the album.

Borei Olam is last. It was composed by Yitzy Waldner and came out as a single last year. There is a great music video for it on DovidGabay.com.

So that is the album. I’ll call it a hit and its interesting that its got so many fast songs. But I advise that you go buy if you ever liked Gabay or even if you didn’t, he’s got a fresh new sound. Check it out wherever Jewish Music is sold.