The Lost Treasure! Sequel to The Golden Crown – Coming Soon!

Just over 25 years ago, the team that brought you the smash hit series The Marvelous Midos Machine, released a Zaydie style story tape, The Golden Crown, which has since developed a massive cult following. Now, a quarter of a century after it’s release Akiva and Yehuda finally make their way back to Zaydie’s house, to enjoy another exciting, suspenseful, and magical tale.
“For years, I’ve heard fans like myself wishfully dreaming of a new installment of The Golden Crown”, says producer Shimmy Shtauber, of The Story Experience & When Zaidy Was Young 3 fame. “And B”H, it’s finally here, complete with all the familiar flavor and charm we’ve all come to know and love!”

Featuring the return of the entire cast of The Marvelous Midos Machine and The Golden Crown, and a story by bestselling author Etka Gitel Schwartz based on the plot by Abie Rotenberg,
along with original songs by Abie Rotenberg, Baruch Levine and Rabbi Shmuel Klein, Shtauber cut no corners in ensuring that Crown fans will be getting something that justifies the 25 year wait.

“The level of acting, sound effects and music on this album is beyond anything that’s ever been done on a story tape before. We even had the timeless “Story Song” redone with a full orchestra and live string section, arranged by the great Yanky Briskman and resung by Abie. The result is something you gotta hear to believe!” 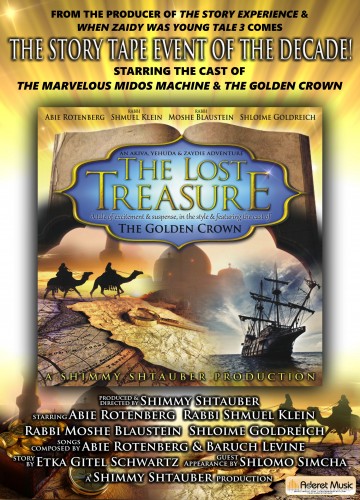