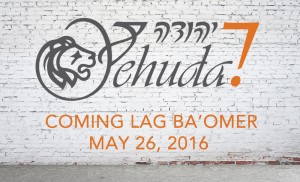 After a 9 year absence from the Jewish recording scene, Yehuda! is back for the first of what is the first of a planned 3 album release over the next 24 month period.

Yehuda’s 7th album, the name of which is still a secret right now, is scheduled for release on Lag Baomer. IYH.

All 12 songs are completely original and ALL feature Yehuda’s multiple talents. Aside from Yehuda’s clear, sweet voice, he wrote the music arrangements, played multiple instruments, including all of the synthesizer parts on the album, wrote the complex vocal arrangements, conducted the huge choir AND in his own recording studio in Cleveland, Yehuda also did the sound engineering and the sound mixing for the album.

There is truly no one in Jewish music who is as multi-talented as Yehuda! On this album he is also joined by two of his sons and his brother Peretz.

A central theme of Pesach, in fact the entire 2nd half of the Haggada is focused on our shevach vi-hodaa, praise, thanks and gratitude to Hashem, for choosing us as his Bni Bichori, His chosen people on Pesach night.

It is the only yom tov that begins with Hallel right in the first night Maariv and then we say it (or better yet SING it) again in the seder. All 4 cups of wine have a central theme of thanks to Hashem. And as we know, the Hallel ends with the verse from Tehillim 118, “Keli Ata Vi-odeka, Elokai Aromimeka- YOU are my G-d and I will thank you, my G-d and I will praise you”. “Hodu LaHashem ki tov, let us ALL thank hashem for He is GOOD, ki li-olam chasdo. His kindness lasts forever”.

This holiday we look at our awesome tradition, our wonderful mitzvos, our families and friends, our history, our destiny and all that we have and surely we MUST thank Hashem. Thanks to Yehuda! for giving us a new and dynamic way to thank Hashem this Yom tov. Hodu LaHashem Ki Tov! enjoy!