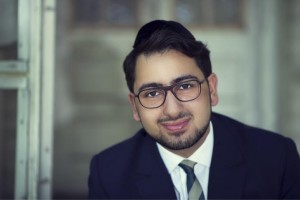 Two years after the release of “Shema Hashem,” a tribute to the martyrs of the Toulouse massacre, comes an all new emotion-laden single from Raphael Ben, this one taking the beloved French singer in a totally different direction.

Peninim poignantly captures the heartfelt thoughts and prayers of a kallah walking down to the chupah escorted by her parents and heavenly angels who echo her fervent tefilos at this most pivotal moment of her life.  Having become recently engaged and looking ahead to his own wedding, Raphael, who has been singing professionally for almost his entire life and now serves as a chazan in Queens, executes the song brilliantly, conveying the depth of feeling felt by every young couple as they begin their new life together.

Peninim was composed and arranged by Shmuel Atlan with lyrics by Ari Gotthelf and is the first of several original projects to be coming from Raphael who looks forward to sharing more songs with Jewish music lovers worldwide.

Enjoy Raphael singing his all new hit song Peninim here and performing at a wedding in Washington DC here.