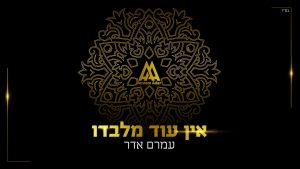 The second album of the successful singer from Miami Amram Adar, stands now at the finishing stages of completion, and will be released just before Rosh Hashana.

With this special time approaching, Amram is releasing the title song of the album Ein Od Milvado as a single. It is a beautiful ballad, written by the talented Itzik Shamli, and arranged by Tamir Zur. The album will also contain the two singles that were previously released to wild success, “Rabbi Nachman” and “Despacito“.