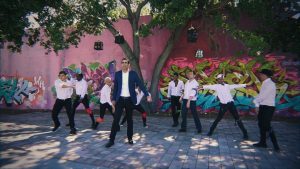 After years of hard work, and after more than four million views on YouTube for the hit song “Halaila,” singer Amram Adar is completing his second album, off which this new music video is now being released. The video is a new and innovative production of the first single released a month ago.

Amram worked together with the world renowned composer and lyricist Itzik Shamli, and with two time Israeli Grammy winning musical producer and arranger Tamir Zur. The song “Rabi Nachman” was given a unique electronic dance arrangement and now will be released as a music video.

The video itself is directed and produced by Yaron Nativ and filmed in spectacular locations on the shores of Miami Beach, Florida. The video tells the story of a man who was fired from his job but still does not give up and continues on. He discovers the words of Rabbi Nachman on this subject, and returns to stand on his feet despite all the hardships he suffered.

On the start of registration for Rosh Hashana flights for “Rebbe Nachman”, Amram’s PR team announces that anyone who watches the video should email them at rabi2017uman@gmail.com and leave their name and phone, will be entered in a special raffle … where they can win a FREE ticket (from Israel or the United States) to Uman for Rosh Hashanah! All you have to do win is enter and maybe YOU can be the grand winner. You have nothing to lose but to dance to the video, respond, and perhaps win.

“Rabbi Nachman” is not just another song, or just a music video,” summarizes Amram, “it contains a tremendous message to all, that only happily can we survive in this crazy world of 2017.”

Keyboards: Or Cohen and Tamir Zur

Directed and produced by: Yaron Nativ

Special thanks to David Kliger 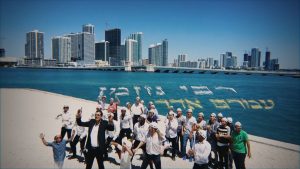