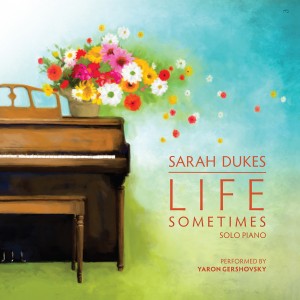 It has been four years since celebrated pianist and composer Sarah Dukes released her debut album of piano solos, Finding Forever. At last, Dukes returns with the release of her long awaited second piano solo album: Life Sometimes. Brilliantly performed by world renowned pianist and composer Yaron Gershovsky, Life Sometimes draws the listener into a journey that mirrors life’s experiences: The ups and downs, highs and lows, and the comforting realization that in the end, everything is carefully guided by G-d.

Yaron Gershovsky—musical director for The Manhattan Transfer, who performed all of Dukes’ pieces on her debut album, Finding Forever— was excited to collaborate with a musician who he hailed as “a true inspiration. Sarah Dukes is a very talented composer,” he shared. “I love to collaborate with her and perform her music.”

Since first emerging as a prodigious composer and pianist in late 2011, Dukes’ career has continued to rise in an upward trajectory. Dukes has been hand picked by Whisperings-Solo Piano Radio as one of their exclusively featured solo piano artists, and was granted the Akademia Music Award for best pop ballad in 2015 for her song No More, which was performed by pop singer Eytan. Her richly nuanced songs have been featured in several popular documentaries produced by Jewish Educational Media, as well as streamed on various international channels including Enlightened Piano Radio, and One World Music Radio. The most recent releases of her singles One: Orchestrated Version, and Raining Rockets introduced a new level of musical beauty to her already powerful collection of original compositions.

Dukes’ soul stirring compositions have received high praise from noted author and lecturer Tzvi Freeman, who regarded it as “one of the best of its genre anywhere!” Matthew Mayer, founder of Solopiano.com has dubbed Dukes as a “bright light in the world of solo piano music”, appreciating her “joyous yet technical and respectful approach to the piano.”

The popularity of Dukes’ music is due in a large part to the honest feelings it manages to convey, through piano alone, and the universal interpretation her music allows. In Life Sometimes, Dukes draws on her own experience with songs such as Dancing in the Dark, where she expresses the pain of a friend battling an illness. For Dukes, this track speaks to the darkness that we experience in our lives, and how we must continue to dance towards the light. An Angel Returns is another emotional piece which expresses that which words cannot— a song written in response to the tragic passing of a young boy in Dukes’ community.

The compositions—which range from expressive and poignant, to hopeful and uplifting—ring with a stunning sincerity and energy which captures the heart and inspires the soul. With this new album, Dukes takes the listener through a faith-driven journey in a musical and emotion filled response to both tragedy and triumph—a journey that is—Life Sometimes.

Life Sometimes, as well as Dukes’ entire discography and sheet music, can be purchased on her website www.sarahdukesmusic.com, in Judaica stores nationwide, as well as online at Mostlymusic, iTunes and Amazon. For more information about Sarah Dukes, her music, and upcoming events, visit www.facebook.com/sarahdukesmusic.