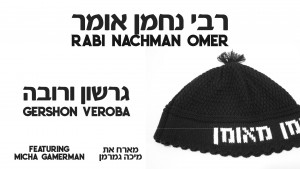 With the fast approaching holiday of Rosh Hashanah, Gershon decided to share one of his powerful new songs with the world, Goldwag’s “Rabi Nachman,” a duet with Brazilian dyno-talent Micha Gamerman. The two of them make a perfect team, sounding so fired up, you can’t just help but get drawn up in the excitement and leave your worries behind with the old year.