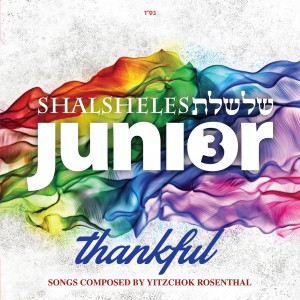 Another excellent album – in my opinion the best- from Shalsheles Junior is here, and while its not brand new, its new to me. To be open, I feel like I missed out having not gotten it right when it came out.
Shalsheles – both Junior and Senior- have earned the reputation of putting out high quality albums: they are “done” well (the production, the mixing, etc.), the music itself is high quality, the compositions are great, and the vocals are beautiful.  They are somewhat unique in the Jewish music scene being a singing group instead of a choir. That gives you room for lots of harmonies and variety with a different feel. Shalsheles tends to go with a modern sound (pop and techno), but is generally not very rocky.

This Shalsheles Junior album, the third installment, features Ari Ettinger, Moshe Rubin, and Michael Weingarten- three excellent voices who could stand on their own but blend beautifully together.

While the theme advertised with the CD is gratitude (and that’s certainly a common theme on the CD), I picked up another theme- achdus. Compared to the previous Shalsheles Junior CDs, I think this is my favorite due to the variety of the tracks that still maintain a cohesiveness. I find that there are some albums where the songs all sound very similar and others where they don’t seem to be even by the same artist. This album managed to find a good middle ground, keeping the CD interesting while still maintaining the Shalsheles flavor throughout. Now for the songs!

The first song with a achdus theme, this song combines various familiar pesukim (Ani maamin, Am yisroel chai, sheves achim , etc.) and is mid-tempo yet the “jump up and down” type at times. Immediately we get a taste of what the album is going to be like and how talented the vocalists are- like the first two albums, great picks!

A catchy English song with a modern pop feel. The violins here really bring you in. Its an upbeat song about- you guessed it- gratitude and having the right attitude. This song will perk you up on a gloomy day and get you going in the morning!

The first slow song on the album is a good one with a lot of stunning harmonies that keep the song interesting and a good listen throughout (I tend to get bored easily…) .  My only complaint is electric guitar solos throughout- while certainly well done, I never understand their place in ballads.

Back to the fast stuff! Another very current song in the same vein as the first two with techno sounds throughout. I think the reason that Shalsheles does this style so well is two-fold. First of all the music itself and second of all there is no screaming, so it doesn’t sound too intense. The mixing is done very well. Probably the most catchy song so far on the album and one of my favorite fast songs.

Another slow song and this one gets a big “wow” from me.  The arrangements are unique and the harmonies are even better than Kivisi in my opinion. You know the words, but it still offers a fresh sound. The last minute of the song is in English  and it’s a neat pseudo-translation of Elokai that maintains the meaning while still sounding musical. Again there are some electric guitar solos that I could do without.

An achdus song and one of my favorites! This song features Kinderlach, singing in Hebrew, and Shalsheles sings exclusively in English. It was a brilliant idea to put these two groups together with this message—had it just been Shaslheles singing in English and/or Hebrew it would have been fine, but it’s a whole other level. The sound again is modern with some techno, which maintains the style of Kinderlach as well. It’s a great driving song, and upbeat.

Familiar lyrics with a Shalsheles Junior feel . This is a very pretty, calm song that makes for a good sing along (if you can hold the notes!). The vocals are stunning in this song.

A rockier song in the vein of “Nar Hayeesi” from the previous Shasheles Junior album, which was one of my favorites. I can see this one being a lot of fun in concert. Its up-tempo and high energy.

This song in my opinion is the best on the album and I hope it gets more attention. It’s incredible. On the surface, it’s an especially pretty Shabbos song that stands well on its own, and a good sing-a-long, especially with the “ai-dy-dah-dah-dah…” throughout. But the song is taken up to another level with the collaboration of Yedidim Choir and Yedidim Junior Choir! They both provide harmonies throughout, in addition to Yedidim Junior solos that follow the boys of Shalsheles Junior.  Thus, in my book, its another song adding to the second theme of achdus. Gorgeous, and of all the songs, most definitely the one I will play over and over again. After the first time I heard it, I thought “Well, why’d they make it so short?” … it happens to be the longest song on the album at 5:25. I think they could’ve made it much longer and not lost anything in the length.

The album closes with a bang! Up-tempo techno song, probably the most modern and techno sound on the album. Definitely leaves me excited for the Shasheles- junior or senior- CD!