Guest Review of Benny – Fill The World With Light – Leibel B 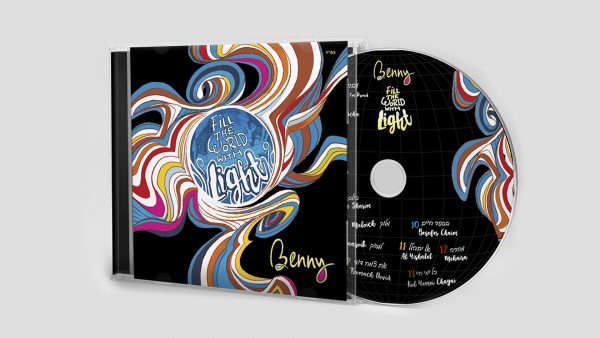 Benny Friedman’s latest “Fill the World with Light” album is a wonderful listen. Benny is gifted with a beautiful, pleasant and sweet voice, and he could choose to sing pretty much anything and it would sound good. His albums tend to lean toward a more pop* sound and this one is no different. There is still plenty to enjoy even if pop isn’t your thing.

*I have no technical knowledge or understanding of music, or of the terms and names of music styles. So when I something like pop, jazz or rock, I’m pretty much just making it up, and saying what sounds right to me. But hey, this is a semi- anonymous review online. I get to do what I want.

Oh, and if I can do what I want, I can refuse to use words and phrases used in virtually every press release or review of a Jewish music album. So you won’t read phrases like fresh, the Jewish music scene/world (or more specifically, rock the Jewish music/world), fresh, or blending a modern sound with the old traditional Yiddisheh taam. Did I mention fresh yet?

Anyway, onward to the songs:

Ivri Anochi – This is the one that teenage girls and middle aged men trying too hard will pumping loudly through open car windows. The arrangement offers a Middle Eastern hora feel, but the song is unabashed pop. The catchy and repetitive chorus, peppy beat and proud Jew theme give this song all the hallmarks of a hit. Bonus points for the “I’m a Jew and I’m proud” bridge. I could do without the whooping and “heys,” but if that’s your thing, they’ll be coming back again with a vengeance.

Al Tishlach Yadcha – A simply beautiful song. Yes, Hebrew, is not my forte, but gone are the cheesy Hebrew lyrics from the likes of Yesh Tikvah and Ivri Anochi. This a haunting plea to our Father in heaven sung stunningly, with a simplistic arrangement that let’s Benny do the job without taking him over. Choir work could have been better, but that’s a tiny quibble with an otherwise beautiful song.

Laasok, Al Yishallel and Ashirah are all great “sing along” kumzitz style songs which have become pretty popular nowadays. By far, my favorite of the three is Laasok, on which Mendy Hershkowitz does a fantastic job arranging. The swing, jazzy style along with the musical and vocal shticklach makes for a terrific song. Al Yishallel is a pretty, fun, foot-tapping number, though Ashirah doesn’t do much for me.

Reb Yehoshua Omer – I’m sure this wasn’t easy to do – mixing spoken word audio into an up-tempo song – but it ends up as a fantastic tribute to Rabbi Gordon. Even though I’m not quite sure if or how the “Hu Avinu” lyrics match the chorus and bridge – it’s still a great tune, and masterfully put together. The song is called “Reb Yehoshua Omer” even though the quote is Rabbi Gordon quoting the Rebbe. I’ll leave it for others to say something deep about shlucho shel odom kemoso, or Torah nikreis al shmo :-P

Fill the world with Light – I’m not a huge fan of the fake music, auto-tuned, overly synthesized sound, and especially not cheesy English lyrics. So a song arranged by Ian Freitor with nary a real instrument in earshot, and lyrics like “There’s a joy you just can’t hide when friends are by your side,” should suck, right? What can I say – I really like the song. It’s fun, upbeat, and it just works. Kudos all round.

B’sefer Chaim & Kulam Sharim – Fun, catchy pop ditties, the former replete with a klezmer style clarinet arrangement and the latter with lots of whooping and hollering that makes me want to yell at Benny to GET OFF MY LAWN AND TURN OFF THE LOUD NOISE HE CALLS MUSIC.

Meloich – Another beautiful ballad. When I first heard this, I checked the album notes to see who composed it. I did that for only one other song – Es Tzemach. (Spoiler alert: both Yossi Green.) On many albums it feels like they throw in a few slow songs and hope something sticks. Here, there are a bunch of truly great songs, not a sleepy one in the mix.

Es Tzemach – It took only one listen for me to have “ki lishuoscho” stuck in my head. Yes, coworkers have been subject to my outbursts of the chorus at random times throughout the last few days. I’m not apologizing. I love the arrangement, the choir, the Yiddish bridge, the “chazanos” interlude in the middle, everything. The song is loooooooong, but worth it. Even clocking in at close to 8 minutes, they still couldn’t get enough of it and opted for the old-school fade. One more time, “ki lishuoscho kivinu kol hayom…” Ahh!*

Mehaira – Speaking of fresh – if there is one thing the Jewish music scene needed to rock its world, it was a slow mehaira with stirring strings, overbearing brass and sweet vocals. Hey – why not throw in a bird tweeting/nature sounds intro? Why no waterfall? Still, it is a nice song. They really went all out on the strings, which does take the song to another level musically.

Overall, Es Tzemach and Al Tishlach Yadcha are terrific standouts, but there is barely a weak song on the album. One word that I actually removed a few times for fear of being repetitive was “fun.” Benny’s debut album was great, but I haven’t enjoyed subsequent releases as much (Bnei Heichala is a different cheshbon). Fill the World with Light Makes Benny Great Again (sorry).