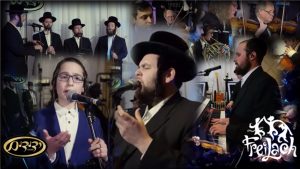 Next up in the Freilach Band Chuppa series, where we bring you high-quality videos from some of the magnificent Chuppahs at which Freilach Band performs, watch this stunning Chuppah which was performed live in Ateres Chaya on June 8, 2017 by Shmueli Ungar, child soloist Yossi Weiss, and accompanied by Yedidim Choir.

The Chuppah commences with a brand new philharmonic opening arranged by our own Tzvi Blumenfeld.

It is then followed by Mi Adir, which is customarily performed while the Chosson is under the Chuppah. It was performed here to the tune of “Shomer Yisroel” by Dov Hoffman. It was composed by Yossi Green and rearranged for this Chuppah by Tzvi Blumenfeld.

Mi Bon Siach —which is sung while the Kallah is under the Chuppah— was originally recorded as “Proik” by Mordechai Ben David on his album ‘Just one Shabbos.’ It was composed by the famed composer of Modzitz, R’ Bentzion Shenker z”l.

Watch, enjoy and don’t forget to subscribe so you never miss a Freilach video!

To have Freilach Band enhance your event or Simcha:
212-234-2779
mail@BeFreilach.com