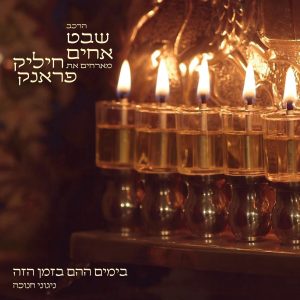 The Shevet Achim Ensemble, has released a new and fourth album for Chanukah this time with guest star Chilik Frank! The album features Chanukah melodies, on acoustic instruments in a style influenced by klezmer and classical elements.

Shevet Achim began as a family ensemble some thirteen years ago when the Kohn brothers and sisters recorded a disc as a fiftieth wedding anniversary gift for their parents. Since then it has developed into a highly professional music group, embracing other outstanding musicians, yet retaining the family warmth and atmosphere. Their music has been highly praised by musicians and laymen alike. (“Top notch”, maestro Evgeny Tsirlin)

Beyond the artistic dimension, the music harks back to the inspiration of King David and the Levites, and aims at drawing the Shechina to dwell among us. The harp, violin, flute, Chilik’s clarinet, piano, cello and string bass are also reminiscent of a time long ago, reinforcing the meaning of the title taken from the blessing of the Chanukah lights, “In Those Days at This Time.”

Dvorah, the flautist and arranger speaks of a special meaning this Chanukah album has for her. “In the time of the oppression of the Jews behind the Iron Curtain in the USSR, my husband used to light the Chanukah candles at home before Shabbat, and then walk over 25 kilometers in the freezing deep snow in order to pray with a minyan in the morning, have a Shabbat meal and learn Torah with his friend. I believe that our opportunity to share the warmth of this Chanukah music , flows from his snowy footsteps behind the Iron Curtain.”