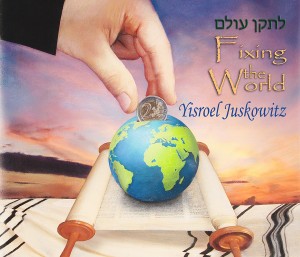 For some people Tikun Olam, the notion of making the world a better place, is an abstract concept that might enter their thoughts occasionally, but for Yisroel Juskowitz, Tikun Olam is both a way of life and the theme of his second album, appropriately titled Fixing the World.

Calling Juskowitz a singer/songwriter/guitarist would be massive injustice because in addition to his musical abilities, Juskowitz is also an artist, a published author, a certified life coach and a motivational speaker.  His beautiful handiwork adorns the cover of Fixing the World and his debut album A Narrow Bridge sold out its first two printings.  With his newest release, Juskowitz combines his many abilities into one comprehensive work that will simultaneously delight, entertain and inspire listeners.

The song’s themes tackle topics including praise, comfort, unity, Shabbos, inspiration and more.  Written introductions and dedications that appear in the beautiful booklet for each song, including one to the soldiers who fell in Operation Protective Edge, elevate each one to a higher plane by imbuing them with meaning and presence.  Particularly outstanding are Kel Adon, a moving heartfelt composition that describes the majesty and splendor of Hashem’s creations and Litaken Olam, words that we typically say several times daily, yet don’t often take to heart.

With Fixing the World, Juskowitz has managed to create a treasury of songs that are about more than just listening to random notes – each one is literally a building block, artfully packaged and delivered by Juskowitz, enabling each of us to make the world a better place, each and every day.

Fixing the World is being distributed by Aderet Music and is available at www.mostlymusic.com.  For more information on Yisroel Juskowitz and Fixing the World go to www. yisroelworld.com.