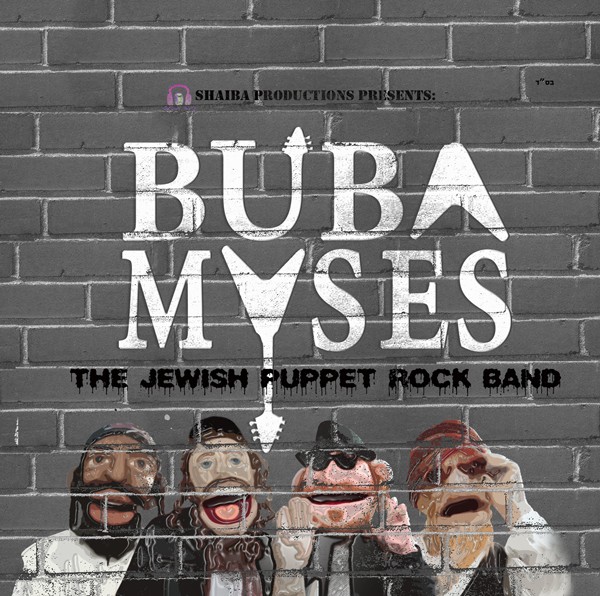 What in the name of Jim Henson is going here? Why the dolls? I love the double entendre of your name. Whose idea was that? And what came first, the band, the dolls, or the name?

The idea was both of ours – my partner Nati Shayish and myself, Shai Barak. We had always dreamed of establishing a Jewish puppet troupe, especially once we produced an educational DVD for children about Mitzvot, and for the first time we worked with puppets. We then realized that it’s much easier to transfer messages through the dolls, since no one judges them by the size of their beard or the color of their kipah. Even adults find it easy to connect to the messages that humans have more difficulty presenting.

Once we decided on the idea, we searched for a name that would be clearly Jewish and have a catchy theme, and we came up with Buba Maises, Yiddish for “wives’ tales” and Hebrew for “Doll’s action”…

It must get hot back there… Does it interfere?

You hit upon a sore point! :) It is indeed hot under the puppets. They are made of fur, and the ability to perform, to play and sing when you’re wearing fur is not simple. It took many hours of training excellent musicians who play in a band so they can play with them from the instrument into the puppet, so that they should operate while playing and to make the audience really feel like the puppet is doing the playing.

At least one of the guys looks like he walked out of Reva LeSheva. Do each of the characters have influences? Do they all have unique backstories?

Firstly, the lead singer of the Buba Maises is Chanan Elias; an excellent singer who formerly served as the Reva L’Sheva’s keyboardist. But just when we created the characters, we tried to make each of them a different character but with the basic outline of musicians who were Chozerim Beteshuva, as we know of quite a bit in the music industry now. Anyone can imagine for themselves which of the puppets most reminds him of a particular musician. However, none of them were formed as the specific model of a singer, but rather with general guidelines to suit the characters. The band tells the story during performances, that they were four excellent musicians playing rock and roll for years, until each way “repented” and since then, they continue to delight with an Israeli Jewish content and excitement, but without losing the classic rock and roll spirit.

I’m seeing some influence from all over the Jewish music scene – MBD and Carlebach, of course, and Diaspora, Piamenta and Matisyahu as well. Who else is behind your groove?

Buba Maises’ performance is very diverse and adapts to any Jewish audience, and therefore the bands’ singing styles varies from “Hallelujah” by Leonard Cohen through “Adon Olam” and “Kol HaOlam Kulo” to songs of MBD and Avraham Fried. Of course, all your favorite songs get new arrangements and rhythmic elements to be energetic and suitable for all audiences.

You say the story behind the puppets is one of BTs getting out of the non-Jewish music world. Is there any truth to that for the puppeteers? Have you been in touch with guys who were like that, like Yess, Piamenta, Rosenblum, Lazer Lloyd and Isaac Bitton?

As we said, the story of the members of Buba Maises is a combination of similar real bands and characters from the genre of Jewish alternative music doing Teshuva, with additional creative elements that we made up ourselves. By the way, we will soon post a very funny and sensational clip from an “interview” with the band’s singer, Josh Friedman, where he talks about all the secrets behind the Buba Maises. Keep tuned for surprises!

Nati and I are originally from religious homes, but Chanan Elias, lead singer of the band who plays Josh Friedman, fits the story of the character that he plays – which was totally unplanned. He was a singer and actor in Los Angeles and accompanied many famous artists before doing Teshuva, and subsequently moving to Israel where he continued his career and performed with a lot of groups: Rabbi Shlomo Carlebach, Reva L’Sheva, Ein Safek, and more …

You guys seemed to have a blast tweaking VERY old favorites in your English Medley. Where did the ideas come from?

Your style is mostly rock, but not just in terms of the heavy guitar and drums placement, but also, in something Jewish music hasn’t seen much of, your vocals – rock power, rock range. Tell us about where that comes from, and your influences in that area.

We wanted to bring a different style to the music of Buba Maises. Puppets add a benefit in that they can do things that normal people can not do, and people love it. As for the style of music, we try to draw the line of accepted Jewish music, but yet take it one step further.

We are always getting comments from people all over the world who are very connected to the music even though they do not come from the world of Torah. Chanan’s virtuoso ability as a singer plays a serious role here because it has the ability to be expressed in authentic high Rock ‘n Roll tones, while sounding great, and it really gets people to connect and love the music.

What about your recent concert with Avraham Fried? How did that go? Any other future plans with top names?

We had the special opportunity to appear with Avraham Fried at the giant Sultan’s Pool in Jerusalem. We appeared after a funny clip that was screened in the middle of the show, and the band ended up singing the song “Moriah” in a duet with Fried – each in his own style. Besides being one of the most amazing and humble people we’ve ever worked with, and besides being a great musician, was a great actor and collaborated happily with the puppets. The audience, which was not expecting a surprise in the form of a puppet show with Fried, responded very enthusiastically! We are going to cooperate with a few leading bands and singers in the Jewish music market and we’ll post more duets and clips. Keep posted for surprises soon! :)

Since our duet with Avraham Fried, we get calls constantly from musicians who want to cooperate with us. Currently we are exploring all options. Hopefully you will soon see the doll’s surprising duets with artists we all know and love.

Our message is Ahavat Yisrael. We find ourselves recently appeared in various Jewish communities in the U.S., Amsterdam, Germany, Canada, Hong Kong and in fact any place where there are Jews, and every time, we are surprised again to hear how, through the puppets, the crowd feels closer to Judaism and to the Jewish people.