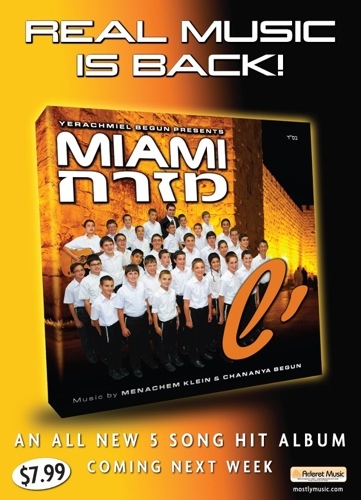 MIAMI MIZRACH anticipated album arrives next week in the USA! Yerachmiel Begun presents the debut album of the Israeli branch of Miami. This amazing all-new hit 5 song album priced @ $7.99, is the first of its kind since MIAMI put out the highly acclaimed Light Up The Nights Chanukah classic 5 song album in 1997. This album will also be available for download at mostlymusic.com next week.

In the words of Mendy Werdyger of Aderet, the album’s distributor, REAL MUSIC IS BACK! There is no other way to describe this phenomenal sounding heartfelt choir and soloists. With new up to date arrangements by Menachem Klein and Chananya Begun and spirited melodic melodies that will remind you of albums where you use to listen to the songs over and over. This is such an album.

Nachum Segal will debut music from the album tom.( thurs) morning. on Jm in the Am. and Yerachmiel will be in the studio with Nachum next thursday the 27th. Members of MIAMI MIZRACH will be calling in from Israel, as well as members of The USA group, The Miami Boys Choir.

Already the talk of the town after being announced last wed., is the 3 major MIAMI – EAST MEETS WEST shows Chol Hamoed Succos oct 3 and 4 in brooklyn. The Israeli choir arrives into NY at JFK, on tuesday night, at the start of Chol Hamoed.

For info on these historic shows go to jewishtickets.com. Also the thurs eve. Oct 4 show will be shown live in many cities by Satellite hookup to specific locations throughout US and Canada. For info go to Shirainu.org or jewishtickets.com.