JMR would like to welcome another new writer. Please enjoy this debut review of Meydad Tasa’s all new album, Ata Melech 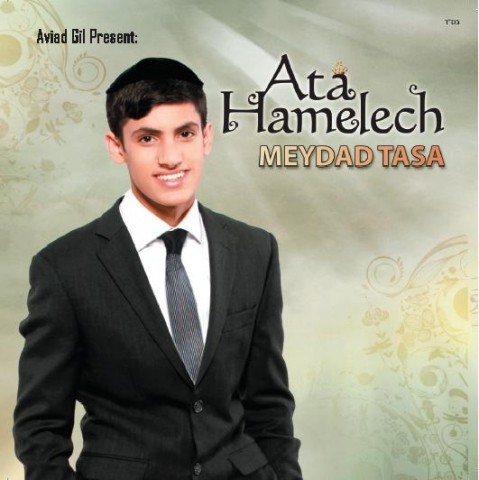 Meydad Tasa is back with another brand new album. “Atah Hamelech”, produced by Aviad Gil, is a little different than Meydad’s previous albums. This album is mostly a Middle-Eastern\Sefardi style album. All 10 songs have lyrics written in Ivrit. As we started to see in the last album, “Gadol Hashem”, Meydad’s voice continues to mature and is really starting to develop into a rich and strong voice. What does this mean for him? For starters, this album, can apeal to all ages. For those that don’t enjoy child singers, you can now hop on the Meydad Tasa band-wagon as you will not be hearing a child’s voice on this album. A plus for Meydad is that his younger fans will probably continue to listen to him as they have enjoyed his music until now and they will also continue to connect with him for he is still a bochur in Yeshiva and is closer in age to the younger crowd than other singers. In the big picture, we now see that Tasa has retained his voice, which is always a big question for child singers, and potentially has a big career ahead of him if that is what he chooses to do with his life. Here is a look at the songs on the album.

1-Oy Nah Lanu- The first song on the album and also a slow one. I always say that if you are going to start your album with a slow song, you better make it a good one. Wow! He absolutely nailed it with this song! It is a stunning song that talks about Hashem crying over our aveiros but still expressing His love for us and asks us to return to Him. Then, Klal Yisroel pleads with Hashem to pardon us and take us back. Medad sings it with a lot of feeling and hartzigkeit. The song is also a bit different than your average jewish slow song and at times reminds me of the “Titanic” soundtrack. If you want a reason to buy the album, it’s this song.  5 out of 5 stars
2-Atah Hamelech- This song is the title track and a great choice. Many songs on the album talk about Klal Yisroel recognizing and connecting with Hashem, the King of all Kings. I would have enjoyed the song more, if i had not heard Ben Shel Melech which i think is too similar. 3 out of 5 stars

3-Kol Mah Sheani- The high part says that everything I want is only to serve Hashem, which is why we are here. Is is very enjoyable to listen to as the high part is not as rocky as the lead up bridge
(1:45) implies. The song is already popular in Eretz Yisroel. 4 out of 5 stars

4-Melch Malchei Hamelochim- This is the third fast song in a row. I would have done without the computerized intro which I think is not needed at all and does not sound like the rest of the song at all. The song talks about Hashem only wanting what is in our hearts. It is an average song. 2 1/2 out of 5 stars

5-Torah Hakedosha- The second slow song on the album. The lyrics to this song were written by Harav Yaakov Adas Shlit’a who is from the more famous Mekubalim in Yerushalaim. Probably the first Mekubal to write lyrics for a modern Jewish music album! Beautiful song. 4 out of 5 stars

6-Bachatunah- A very pumping fast song and fun to listen to. It has a chance to become a popular chasunah song for Sefardim and those daring Ashkenazim! 4 1/2 out of 5 stars

7-Ben Adam- Too similiar to the previous song.  2 out of 5 stars

8-Rachem V’nachem- Eighth song and only the third slow song. Very few lyrics which will make it easier for those American listeners to understand. A very hartzige song and more traditional sounding than
the first song on the album. 4 out of 5 stars

9- Al Tishabar- A very intense thumping song that is sure to get you to move. An excellent song and is also more Sefardi sounding than the others. 5 out of 5 stars

10-Aufa Eshkonah- Also very Sefardi sounding but different than Al Tishabar. Meydad also does some Sefardi chazzanus at 2:22 and general sounds very at home on this song. Listen to 3:00 and let me know what
he is doing there. I am not sure myself and maybe that’s why I’m not Sefardi!

All in all, a great album especially if you prefer fast songs over slow as there are only three slow songs on the album. Also makes for great driving music! If you haven’t got hooked on Meydad Tasa yet; now is the time. I give the album 3 1/2 out of 5 stars which means, not the best album I heard all year but a great buy.

You can purchase Ata Melech by clicking here.