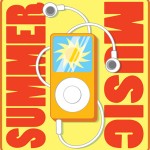 As August  rapidly draws to a close, day camps, at least where I hail from, have all closed up shop and the first busloads of sleepaway campers have begun to deposit tanned, happy and exhausted campers back in their hometowns.

With three of my children ending up in a total of five different camps this summer and assorted nieces and nephews in another four camps, I asked them all what albums or songs they heard played over and over again in camp this summer.

Not that it came as much of a surprise, but they all gave me the same answer.

The music they heard repeatedly this summer?

Yes, there were other things played, but there is no doubt, that of the nine camps I polled Ya’alili was the clear favorite.  Nothing else even came close.

What were the songs of the summer where you were this year?  Drop us a comment and let us know!