Review of A.K.A. Pella 3 -Adaptation 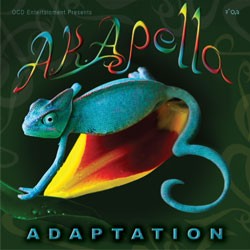 I’ve recently written two reviews of A.K.A. Pella CDs, so you should know by now that I consider them to be a very talented and creative group.

I can recap by saying they are not your typical acapella group. While they do have great voices and while they do beautiful harmonies, there are major differences. First of all, it doesn’t sound like acapella. They have the ability to sound just like instruments, from beatboxing to guitars and trumpets– it’s sometimes hard to believe that you are really listening to acapella. But don’t worry, you are! Seccondly, the vast majority of their songs contain at least an intro or another part from a popular secular song. But most importantly, like I said above, A.K.A. Pella is extremely creative. Every song has something different about it. Listening to the CD is exciting.

I generally write a few paragraphs of general things about each CD, but the truth is that there is not THAT much difference between the first two CDs, which I just reviewed, and this one. There is no point in me writing up what I wrote before when you can go and read it pretty easily.

So I’m going to go through each track, like I also usually do.

1. Eitz Chaim
This is a parody of the secular song “It’s My Life” by Bon Jovi (playing on the life theme, I guess).  It’s a little scary how much this sounds like music, especially in the intro. I also can’t believe how well the words of Eitz Chaim fit into this rock tune! It’s very rock and roll sounding, from the harmonies to the drums and guitar. Here’s a good example of their creativity– who would have thought of this? This song is really fun and catchy and I love listening to it, especially when trying to get pumped up early in the morning or when driving.

2) Halleluka
I did some Googling to find out that this song is a cover of a George Harrison song that’s primarily about a hindu god. I’m thinking the guys from A.K.A. Pella didn’t realize that (I don’t think most people know what songs by any of the Beatles are reallyabout) , but now that I know it, I must say it makes me a little uncomfortable. Anyway, it sounds very much like a typical gospel song. The harmonies, background vocals, and snapping in the background all add to it. It’s very pretty, though, and arranged very nicely with about a million parts between all the different percussions, other instruments, harmonies, guitar, soloists… and I think the vocals in this song are particularly good.

3) Mi Bon Siach
This is a parody of the secular song “You Raise Me Up”, which actually has some really pretty inspirational lyrics, but is not inherently non-Jewish. I think it’s a really good choice of song for them to remake. It’s a slow and emotional tune, and the vocals here have a lot of emotion in them as well. I think this is one of the best songs on the album (check out 3:20!), and for someone who is not generally a fan of slow songs, that’s saying a lot.

4) Adon Olam
I’ve heard that the words of Adon Olam can fit into literally any tune. I’m not sure if it’s true, but they do fit into the tune of “Hey There Delilah”, a pop song from about four years ago, really well. It’s a soft and simple tune, and the song itself sounds more simple than the rest of the songs, without a lot of instrument-like-vocals or big notes. It’s a good song, with pretty vocals and of course the words fitting in perfectly with the tune, but it’s not amazing and it’s not the best on the album.

5) Gam Ki Ailaich
I love this song! It’s a parody of “The Sound of Silence” by Simon and Garfunkel, which gives it a folksy and sort of eerie sound. I don’t know what to say about this song besides that I really love it, and I would put it with the top 5 A.K.A. Pella songs. The vocals are great, the harmonies are great, the tune was a great choice, the “instruments” sound great– it’s just great!  The words go really well with the tune and, well, I just love it. Overall, it  all comes together really well.

6) Ma Tovu
This is a cover of a BBMak song, a boy band from the turn of the century (did y’all realize we can say that, and mean 2000 and not 1900?). With the clear and happy sounding vocals, it still sounds like a boy band pop song even with the improved lyrics! It’s got a faster tempo but is still laid back, which I always enjoy. The guitar at the end (around 3:15) sounds super real. It’s an upbeat song that is nice to listen to.

7) Mi Adir
This is a parody of a song from the 1990s by Celine Dion that I don’t think I ever heard before… It’s a slow ballad. The chorus is really powerful. The vocals in this song are really good. Overall a pretty and emotional song, but I’m not sure the vocals match the song so well. It still sounds nice!

8) Heenay Ma Tov
Apparently this is a parody of a song called “What’s Going on” by 4 Non Blondes, but I never heard it before and can’t listen to it now, so I’m just going to go with that. The song has a pleasant feel, but it annoys me that they only say eight words in the entire song, over and over again, in different ways. I do, though, love the direction the song takes at around 2:45, and from then on, the song is really good. The beginning is a little boring.

9) Ani Maamin
This is, according to what I’m reading, a parody of another song that I never heard before,  “Nights in White Satin” by The Moody Blues. I think if I knew the original song, this version would be a lot better. The feel is sort of bluesy rock and slow. I’m not crazy about it, maybe because I do not like this style of music, but it’s certainly not bad.

10) Yihee Shalom (with Mo Kiss)
I don’t know where this comes from either– a Michael Jackson song called ‘Heal the World” (??). But, based on the title, it’s a good choice going with that similar theme. I really like this song. It has an overall sweet and relaxed feel and pretty vocals. The chorus is especially great, as is the ending starting around 3:45.

11) Chaveirim
This is so smart; it’s a cover of the theme song from the TV show Friends by the Rembrandts. I only remember watching one episode of this show as an elementary schooler,  but the theme song is so well known with the lyrics “I’ll be there for you, cause you’re there for me too”. I mean it’s very clever to take out the lyrics about friendship and replace them with the words “Chaverim kol Yisrael…”  Anyway, it’s a fun and catchy song  that I really enjoy listening to.

12) When the Children Sing (with the Kol Noar Boys Choir)
This song is a slow emotional song about the legacy of Jewish children, power of the tefilah of children, etc. The Kol Noar Boys do a great job here, and I like how (like in Nar Hayisi) they enter towards the end, taking over basically the rest of the song with their harmonies. It’s a pretty song. I just don’t really think it fits in with the rest of the album. Although the slow songs here are pretty and moving, the songs like Eitz Chaim, Adon Olam, and Chaveirim make the album kind of …. I don’t know, shticky, but not in a bad way…in a fun, entertaining, what’s going to happen next, cool way…. so after hearing Chaveirim and then hearing this I was a little confused.  That being said, it is a good song, with a good message, and there is nothing bad I can say about it except that it seems a bit out of place. It’s very pretty and the kids are the perfect addition.

13) Ki Malachav
This is such a clever song, and I love it! It’s a parody of “Leavin’ on a Jet Plane” and the lyrics go with it so well, always with the tune and sometimes with the meaning as well. It’s got a pretty folksy feel and is just easy to listen to with the beautiful but not over the top vocals. The whole song has a sort of goodbye feel, right down to the outro from Sound of Music… “, which is appropriate since it’s the last song on the album. Just in general it is really pleasant to listen to.

All in all, this is a very good album. If you like the other AKA Pella albums, then you will definitely like this one as well. AKA Pella continued to push the bar higher and higher and experiment with their voices and with “music” in general to produce a very high quality album that we can enjoy all year round! There is no reason to put this album away when Lag B’Omer comes! Enjoy, everyone!