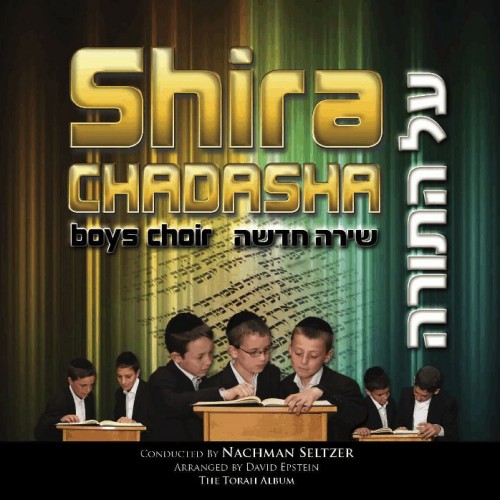 Nachman Seltzer and the talented boys from Israel’s very own Shira Chadasha Boys Choir are back with an all new album “Al Hatorah – The Torah Album”. This album, their fourth (Acheke Lo, Arayvim Zeh Lozeh & The Chanukah Album) boasts 11 amazing, all-new tracks and is their best one yet.

The idea behind the album came to Nachman during one of the choir’s earliest performances; at the Siyum Hashas in Yerushalayim which was held at Binyanei Hauma.

“It was an incredibly moving experience for everyone who had the privilege to attend. Standing right in front of three rows of Gedolei Hador was a tremendous zechus. Seeing the huge crowd stand and call out “Baruch Shem Kavod Malchuso Liolam Vaed” was a moment that brought tears to many eyes. But the highlight of the evening for me personally, was when the Rosh Yeshiva of Yeshivas Mir Yerushalayim, Rav Nosson Tzvi Finkel Shlita, arose to speak. His message was short but so inspirational. “Hadran Alecha Talmud Bavli,” he cried, and you could really feel how much he loved those words. The Rosh Yeshiva continued; “Hadran Alecha Talmud Bavli are the most beautiful words that a Yid can say!”

The album, iy”H, will be released on Lag B’omer by Sameach Music in the US, and by Greentec in Israel.

Here are song samples from the upcoming release. (Contains music) Like Shira Chadasha Boys Choir on facebook by clicking here.