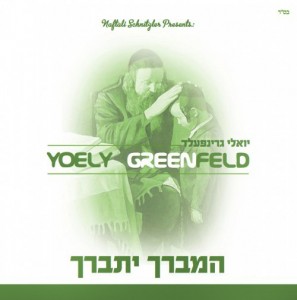 The fact that music plays a big part in Chasidus is widely known. The fact that Chasidus and Chassidim have played a big part in shaping today’s Jewish Music scene, has also become common knowledge. It seems, however, that we have recently had an influx of major Chassidic talent, which has taken us all by storm. Without trying to list all the names, it seems everywhere we turn there is another Chasidic singer either putting out a new CD, becoming the most sought after wedding singer, or star soloist of one of the many Chasidic choirs. There are producers, musicians, and even full bands with Chasidim, and they have added a new dimension to the industry. It seems that there is an untapped wellspring of talent that only recently seems to have been discovered.

That brings us to the brand new debut CD  . Yoely has been highly sought after for weddings for a while, and it seemed only natural that the next step was for him to shine his talents on a CD. He has a very sweet but not overpowering voice, and his range is extraordinary both hitting both low and high notes effortlessly. The album is produced by the ultra talented Naftali Schnitzler, and has been an enjoyable listen.  The only drawback for me is the extensive Yiddish lyrics. Being that I am not a Yiddish speaker, I do not understand most of the lyrics and therefore can’t comment on their content.

Here is a song by song breakdown:

Hamvurach Yisburach: This song is co-composed by David Kaufman and Sruly Meyer, the well known Jewish Music marketing and graphics expert. This is one of four songs arranged by Moshe Laufer in his famous inimitable style. This is a simple yet catchy song that is a real nice pick to begin the album with. It shows enough of Yoely’s talent and has us wanting to hear more.

Eimusei: A slow hartzige niggun composed by Pinky Weber and arranged by Moshe Laufer sounds like a recipe for a “hit” song, and Eimusei doesn’t disappoint. This is a very sweet song that really highlights Yoely’s voice.

Yuchid Imyichud: This song is composed and arranged by Naftali Schnitzler. The music on this song is all techno/programmed which is not my taste, but the song itself is a nice song, although it does sound similar to the song of the same name that is a Chabad niggun.

Zemer: This swing style song is composed by Moishy Wertzberger, and arranged by Ruli Ezrachi. It has some nice twists to the song and is different, which is good!

Ivnei: Not only can Yoely sing, but he composes as well! The song starts off like it is going to be a nice hartzige song, but surprise, this is a real lebidik song with some really nice arrangements by Moshe Laufer and added Yiddish lyrics by Lipa. The adult choir led by Moishy Krausz also adds a lot to this song.

Al Tira: Another song composed by Naftali Schnitzler, this one is arranged by Ruli Ezrachi. This is what’s known in the industry as a “rock ballad”. I think there are two parts of the song that really stand out. One is how the high part of the songs ends “Ki Imuni Kayl” with a complete rest, including how they end the song. The other part is at 3:13 of the song, when there is a complete key change going from the 1st to the 2nd part. Not only does it show off Yoely’s range, but he really puts some power and force into it and helps finish the song off with a bang! This is a real nice song.

Halt Dich Fest/Stay Strong: A song composed by Lipa Schmelczer with arrangements by Moshe Laufer, it’s hard to go wrong. Add in the Yiddish lyrics by Lipa, whose special singing talents, in my opinion, are dwarfed by his lyrics writing. It is a beautiful hartzige song. I don’t understand all the lyrics so it’s hard for me to comment on them, but with the feeling that Yoely sings them, it sounds touching. The song is dedicated as a refuah shelayma for his mother, and we wish her the best.

Akdumis: Most of associate these words with being very tired, but this is a real upbeat hora composed by veteran composer Yitzy Waldner. The arrangements by Pinny Ostreicher do this song justice.

Hashmeeinee: This song is not only composed by Pinny Ostreicher, but he also arranges it as well. Not only do I love this song, but I love how the music starts off very simple and builds up. From the work that I’ve heard of Pinny Ostreicher, I am a big fan, and I think Yoely’s sweet voice really adds to this song.

Hee hee hee: I really don’t have much to say about this song. It is completely Yiddish (besides the chorus, which sounds a little “chevra” style to me) and it is all techno programming. Not my style.

Yechadshehu: We all got a head start on this song when it was featured recently on a music video, as a preview to this album. This song, composed by Naftuli Weill and arranged by Naftali Schnitzler, gets a real WOW from me. Yoely really shows off his range on the song, and also his Hartz. One shtick, while similar to Al Tira, is when he modulates a couple of times (starting at 2:30 of the song).The choir, led by Yoely Horowitz, as he does for most of the album, adds a lot to this song.  Having this song as the last on the album really makes an impression and leaves us wanting more!

In conclusion, I really recommend this CD as one that you will enjoy listening over and over again. I know I did! You can buy or download the CD here: http://www.topjewishmusic.com.