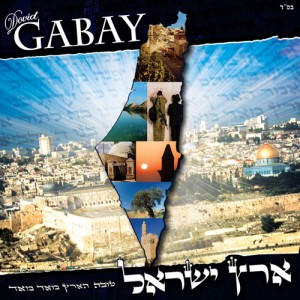 Dovid Gabay is one of the most highly sought after Jewish singers today, so it comes as no surprise that there was great anticipation for his new release Eretz Yisroel. It has been over two years since his last release, Omar Dovid, which in the industry equates to an eternity, and since the news broke a little while back that Dovid was working on this CD, many people, including me, have been waiting with bated breath for the release. Truthfully, I think it is a little to early for me to write a review so quickly after the CD comes out, since I like to have some time to listen and let the songs soak into my brain so I can play them back in my mind over and over, but as a first impression, I must say that this CD is very solid and
has been worth the wait. The first thing I notice on the cover is that Dovid produced this album himself, after having his first two albums produced by Avi Newmark. The CD was recorded part in Eretz Yisroel (how appropriate for a CD titled Eretz Yisroel) and part in New York. As has become almost a standard in a new Jewish music CD today, there are not only multiple composers but also multiple arrangers as well.
Here are my first impressions:
Eretz Yisroel:As the title track, this is one of two songs on this album composed by Elimelech Blumstein, now a veteran composer for the biggest names in Jewish music. Elimelech is linked to Dovid, and in an interview (found on YouTube) says that his compositions of Omar Dovid was his big breakthrough in the industry, so it is fitting that he composed the title track of this CD. Also worth noting, the title track is the first song on the CD. Now to the actual song, it is a very catchy and leibedick song. The song itself is very melodious, the arrangements by Moshe Roth are done very tastefully, and both the adult and children’s choir add to the song. The one complaint is the shortness of the song. The total length of the song is only 3:50 (the cover says 3:37 but in iTunes it’s 3:50) and the first :45 of it is the introduction. I love the intro, but I love the song too, and would have liked it a little longer.
B’Simcha Tamid:The next Hit Hora! Ok, I said it, and I might end up eating my words, but that’s my 1st impression. The song is composed and arranged by Pinny Ostreicher, and as someone on the wedding scene, he definitely has created the wedding hora feel to the song. I am not into all the different languages but that aside, it is one awesome song.
Adon Olam:Baruch Levine! Must I say anymore? Ok, I will anyways. Baruch long ago established himself as one of the premier composers in Jewish music today, and once again he provides a beautiful hartzige song. Baruch himself has an amazing range and many of his compositions reflect that. Dovid has a very sweet and pleasurable voice, and it really shines on this song. Add the arrangements of the master Yisroel Lamm, and this is one song that both relaxes you and perks you up at the same time.
Ha’aderet Veha’emuna:This is a sefardic style song composed by Elie Schwab who also composed a song for Yaakov Shwekey’s recently released sefardic CD and arranged by Ami Cohen. I am not an expert in authentic sefardi music, but this sounds like a nice catchy song, albeit it would probably sound more authentic without the horns.
Bein Ha’ulam:A beautiful and Hartzige song that Dovid first sang on Kumzing, it has already been proven to be an extremely popular song, and with the arrangements of Leib Yaakov Rigler, it is another fine song on this CD.
Berum Olam:Bagpipes! That was Dovid’s first signature moment on his arrival to the Jewish music scene and they make another appearance on this CD as well. This is the second song composed by Elimelech Blumstein, and arranged masterfully by Leib Yaakov Rigler. This song (at least to me) has some bass lines that stand out, and throughout the CD I have noticed as well. The bass guitar is a much underused instrument on the Jewish wedding scene (sorry to the keyboard players playing bass on the left hand…it’s not the same) and so when I hear nice pieces like this, it brings a lot of listening pleasure.
Raza D’Shabbos: Another one of a very nice collection of hartzege songs on this Album. Composed by Moshe Werzberger and arranged by Mendy Hershkowitz of Freilach Orchestras, and one of the up and coming arrangers in the Jewish music scene.
Mi Sheberach: The Mi Sheberach before the beginning of the song brings back memories of Yerachmiel Begun on “We Need You”, but it is a cute and different shtik so I got a good chuckle.
Vehu Yishlach: An upbeat song that is not from my favorites.
Yom Zeh Mechubad:A very nice rendition of Yom Zeh Mechubad composed by Yossi Green and arranged by Yisroel Lamm. My shita on Shabbos Zemiros is very simple. It takes an unreal and unbelievable song to make it as a staple of the Shabbos seudah, and most songs, unless they are composed by someone near and dear to you, will never be sung.
Veyizku: This song has a chance to be a big hit at weddings. It has the right tempo, right words for a wedding, and just is an all around leibedik song.
Just as a first impression, Eretz Yisroel comes across as a very solid CD, living up to its billing. Chances are, Dovid will have a few big hits off this album, as he has with his first two.
You can buy or download the CD here.